The Illusion of Romantic Love

The illusion here is not that romantic love does not exist. I think everyone knows it does. But what is it? How long does it last? How many confuse romantic love with the love that lasts beyond the thrills? How much of our expectations regarding romantic love come from books and movies? Romantic love certainly can be a powerful experience; but people who expect it to last a lifetime often keep moving through partners trying to keep that romantic high.

We read about it in books (like Pride and Prejudice) which inspire heartfelt sighs. We smile over the interplay between Humphrey Bogart and Lauren Bacall in To Have and Have Not, but can those illusions (and romantic novels and movies are illusions) interfere with real life because, although there are exceptions, it mostly ain't how it works out. 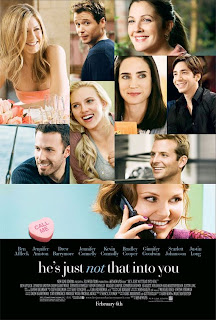 He's Just Not That Into You, a movie currently on HBO and available through Netflix, did a good job showing romantic illusions through several stories of relationships at different stages.

It's not that romantic love is a bad thing unless we become confused with what it really does. Romantic love is a lot of fun (and angst). It inspires beginnings but grows into something else if the relationship is going to last. Unfortunately in our world, expectations for what that will be and how it will last get confused. The illusions are encouraged not only by movies and books but also advertisements.

He's Just Not That Into You is based on a non-fiction book, which came out a few years ago, written by a story editor working on Sex and the City who was frustrated with how often he heard women saying things that worked against their own best interests. That inspired his writing to set it straight-- as he saw it.

When I mentioned the film to my daughter, she said-- and it all starts in grade school. I laughed because that is exactly how the film shows it to be.

The cast is Ben Affleck, Jennifer Aniston, Drew Barrymore, Scarlett Johansson, Justin Long, Jennifer Connelly, Kevin Connolly, Mandy Moore, and Bradley Cooper with an assortment of other characters having some of the funniest lines. The film does a good job of illustrating the traps into which so many fall.

From He's Just Not That Into You:

Gigi: Girls are taught a lot of stuff growing up. If a guy punches you he likes you. Never try to trim your own bangs and someday you will meet a wonderful guy and get your very own happy ending. Every movie we see, Every story we're told implores us to wait for it, the third act twist, the unexpected declaration of love, the exception to the rule. But sometimes we're so focused on finding our happy ending we don't learn how to read the signs. How to tell from the ones who want us and the ones who don't, the ones who will stay and the ones who will leave. And maybe a happy ending doesn't include a guy, maybe... it's you, on your own, picking up the pieces and starting over, freeing yourself up for something better in the future. Maybe the happy ending is... just... moving on. Or maybe the happy ending is this, knowing after all the unreturned phone calls, broken-hearts, through the blunders and misread signals, through all the pain and embarrassment you never gave up hope.

Enjoyed your post this morning Rain but then,unlike most men I suppose with regard to movies, I tend to like your typically referred to "chic-flicks". Huge fan of "Pride and Predjudice" not to mention "Sense and Sensibility".

And I agree, "He's Just Not That Into You" was a reasonably fair portrayal of reality on a number of levels and a very enjoyable movie. And perhaps because it was wrapped inside several budding relationships, the relationship involving Scarlett Johansson and her eyes for a married man I found to be almost disturbing in its realistic portrayal.

It was a very good movie and I have watched it twice so far. It certainly inspires hope in our relationships but doesn't gloss over reality.

By the way, while we have mentioned Jane Austen, PBS is airing a three-week mini-series if you will of her book "Emma" starting tonight on Masterpiece Theatre.

I'll just have to see "He's Just Not That Into You". Thanks for your post.

I think it does exist but, to a degree, is ephemeral. Sometimes, but not often, it can last a lifetime.

We -- I'm talking those of us who grew up with fairy tales instead of Dr. Seuss -- were pre-conditioned for that illusion. We all want the 'high' of that.

My experiences with romantic love have been disastrous so I don't trust it much. Still there's a sign on the wall in my dining room that reads "It's never too late to live happily ever after." The trick is knowing what that means for yourself.

My favorite movie that explores romantic love is
"The Mirror Has Two Faces". There's a great line that sort of sums up how many people approach love: "So when my date takes me home and kisses me goodnight and I don't hear Puccini in my head, I dump him." I think a lot of people -- especially men -- are like that.

Bottom line is that we're all searching for perfection and that, my friend, is the biggest illusion of all.

I think that love energizes some people and cripples others. It like a 700 pound Bengal tiger that you grab by the tail. Do you hold on for dear life or let it eat you ? A lot of scars come with love, but so do a lot of sweet memories...

Thanks so much for the heads up, Alan, on the new version of Emma. I miss so much on Masterpiece Theater but not keeping track of what is playing and then rent it later or in the case of Elizabeth Gaskell's stories, buy the series. We have been watching Cranford and only discovered now that there was a Return to Cranford that I missed earlier this month. Both Farm Boss and I love these kind of stories; so it doesn't surprise me that you would also like them. They are so much about a cultural period and human nature. Cranford in particular has been delighting us but until I saw The Elizabeth Gaskell Collection (Wives and Daughters, Cranford, and North and South), I really hadn't known anything about Gaskell which is a shame as her stories are delightful.

I really recommend Jane Austen and the Elizabeth Gaskell BBC videos because they are a healthy distraction from our current political situation. They take you to another time and remind you life has often been complex and had a lot of heartbreak attached to it. The pace of the films, the characters, but then what they also faced just seems very good to me especially right now.

and I will definitely check out The Mirror has Two Faces, Kay. It sounds like another very pertinent look at relationships and people. Thanks.

Paul, you said it well about love. I think some also of what people call love is really a kind of lust (not just the sexual kind) wrapped up in supposed love but more about us than about the beloved. I am not sure of what it really is. Sometimes the person wants to love someone who they have created but doesn't exist-- perhaps the mirror of themselves.

It is too bad that I didn't know what I now know during my daughter's formative years... bought her movies like "The Little Mermaid" and let her watch them over and again... stories about women who just didn't think their situations were as good as being with a man who could promise her a "better" situation.

I was expecting He's Just Not That Into You to be more of a comedy so it took me a while to get into it. But after watching it, I thought it was a good film. It definitely demonstrates how men and women sabotage themselves when it comes to finding a mate.
And I think you are correct Rain, some people are in love with being in love instead of being in love with the person they are with. And some people are just after the chase. They want that energizing lust of a new relationship all the time.

Romantic love is something we all deeply long for and many of us think we can beat the laws of limerance. But, we can't.

I am truly cynical about romantic love because it is so temporary--and I've been burned too many times.

Your current writings about illusions are very, very provocative, Rain. I think you've got yourselves the makings of a book here.