A relaxing week-end with family at Klamath Lake. There are a ton of photos and more will follow. Here's an example. 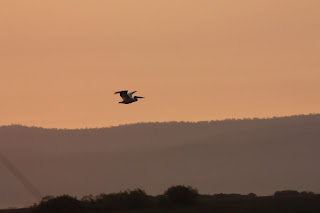 There are so many wonderful photos. -- along with some failures that make me want a better telephoto. I think I will sort through and turn these into a trailer as kind of a contrast to what we are facing as a people politically but what is in nature and must be protected if we want future generations to have a chance for any part of it.
Posted by Rain Trueax at Sunday, August 26, 2012 1 comment:

The best campaign video you will see this year

Kay had this one on her blog. I like it for assorted reasons. It represents the start of the campaign season here at Rainy Day Thoughts. Until the election, with pretty much only a few breaks, this blog will be political and discuss whatever is happening in that line.


This is what is at stake and for anybody who thinks Obama has been a disappointment, I hope they will stop and consider what Romney will do to a ton of issues important to vulnerable Americans as well as progressives. Over the next months I'll be reminding readers what those issues are.
After the election, no matter who wins, I hope to forget about politics for a year! Until then, I will do my best; but in the end, we, as patriotic Americans, do accept how the vote goes and hope for the best! Until then, it's all out for what I consider to be one of the more important elections of my time in terms of which way this country goes.
Posted by Rain Trueax at Wednesday, August 22, 2012 3 comments:

Seasons and their wisdom

The first leaves are beginning to turn color. 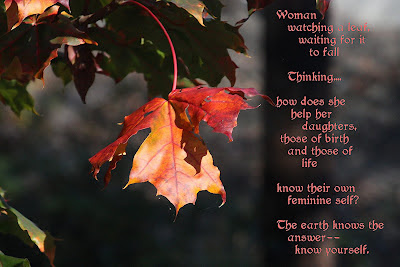 Woman
watching a leaf
waiting for it
to fall

Thinking...
How does she
help her daughters,
those of birth
and those of
life
know their own
feminine self?

The earth knows the
answer--
know yourself.
Posted by Rain Trueax at Friday, August 17, 2012 8 comments:

The changing nature of family

The link below interested me as it's the other side of something I have read more about-- unconventional living arrangements. By unconventional, I don't mean sexually but just not the norm of male-female living together. It is discussing a changing view of family.

With older people this co-op living has been seen more and more as the economic conditions in the country become more difficult. Sometimes the people are living in quarters someone else created and charged a fee for the help provided. Sometimes a group gathers together finding they can live better together than alone.

But to see it be four men not yet 40 who have done it for eighteen years, where none of the four are couples, well that's a bit different.


A cornucopia of bachelors

The benefits are emotional and economic.  Obviously they can live in better quarters by sharing them but there are emotional pluses. Wonder though what will happen if one falls in love and leaves home. Will they look for a fourth to fill out their budget needs?

It's not uncommon out where I live to see it be brothers or sisters who have just continued to live together. Or one child who stays with the parent both for economic reasons but also convenience and care. The reasons vary; but if it works, it's good and maybe more people need to consider optional living arrangements.

Because nature fascinates me and predators especially of interest, I thought this article might interest other readers. I had never heard of this happening, but it makes sense as wolves kill coyotes. So it's not as though predators won't attack each other-- when either their food supply is threatened or/and they believe they can win.

People often make the mistake of painting predators as superior in motivations to say humans. They might be less complex in their motives, because they have more problems in getting food which keeps them down to basics (and their breeding is more seasonal and biological with less emotion-- we think), but superior? Not so much. We are all just animals in the end. We do what we do because we feel it will benefit us. Humans can operate a little further out there for what we think that will be but often we are shortsighted and base in our motives. Because we have a more complex language, we just paint ourselves loftier.

Going along with this, before I had a chance to publish, came the following story which led eventually to the killing of the cougar as it simply approached too close to too many humans with no fear. Cougars can be quite curious and innocent in that curiosity and then again they are predators who must kill to live.

Nature as our sustainer 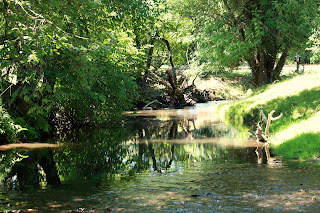 These days, with all the upset we are experiencing in our country, the turbulence of a major election, big climate changes, violent responses by some that threaten innocents, economic transitions, and on it goes, it's important to know what is happening but also stay grounded in ways that are healing. We don't want to become sick from all the stress. We have to keep always in mind that we have to make our own lives good. 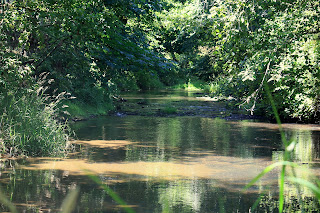 I find that for me one of the most joyful supports always comes from time in nature. Fortunately I live on the banks of a stream which in the summer is always a joy as it follows a lazy meandering path as it does what it does best-- provide a source of water for the land, the plants and the animals who live by its banks.

When wading in the stream, in a low water season, there are interesting rocks to examine. Crawdads, mussels, and once in awhile an artifact left behind by those who came before us from the Native Americans to the later settlers.

Our farm is much blessed by this stream. It provides the sustenance to the grass and the animals that count on it for water. It's been a busy time here with getting in hay, and Farm Boss extended the fences to give the cattle more grass on the leased pasture. They are happy and that makes us happy. 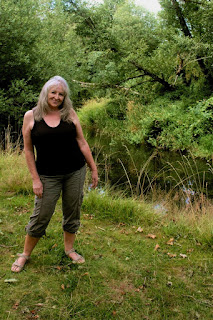 I have a little buddy who doesn't go out into the fields with the others. Most days he hangs around the house saying-- maaa maa which sounds like ma to me. He's old as the hills and should not be alive as he's a wether which means neutered male. They are what make up lamb chops. He was missed in his own round-up, fooled us into thinking he was a ewe because he so often has little ones around him. Lately with teeth missing in front, he is devoted to me and my daily feedings of cob (corn, oats and barley). He's as close to a pet as I let any sheep be. I have no idea how old he is, but he's not giving up yet. This summer, he didn't get shorn with the others-- too slick for that, but Farm Boss says he'll do him one of these evenings. He doesn't have a name-- other than oh you again-- but maybe he should have had. 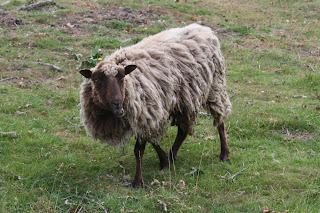 Another attack. I really wish I understood what is going on where it comes to this kind of senseless violence. Over and over we are saying the same thing. Why? And then such sorrow for the victims and their families. Depressing doesn't begin to describe it. :( I don't know if it would help to understand the why because there can't be a reason most of us would understand. Just so tragic.
Posted by Rain Trueax at Sunday, August 05, 2012 5 comments:

Maybe I have or have not mentioned here that I don't watch Olympics. It hasn't been my thing; but after reading this and seeing the photos, I may have to reconsider. *fanning myself*

Now I do understand that a lot of men are muscling up these days. I know this based on looking for photos that will work for covers or trailers. My goodness! But really-- these swimmers have to be about the tops for physical structure in a guy. Wonder if any of them have thought about posing for romance covers. *s*

The question I have though is-- were these kind of muscles so visible on them when I was young? If so, where was I?
Posted by Rain Trueax at Saturday, August 04, 2012 8 comments: