The source of dreams?

Because of reading a mystery that has murder at its core, I was not totally surprised when early in January I woke up in the middle of the night from a nightmare. The irony was when I went back to sleep, I had another violent dream but with less of an interesting plot. Did I give up finishing the book? Not a chance. 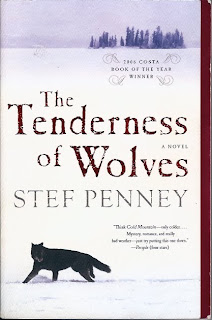 The Tenderness of Wolves by Stef Penney is an excellent read. The murder mystery at its core is only the catalyst for revealing many secrets in people's lives. The story is set in Canada's Northern Territory in 1867. It deals with human nature, The Company (Hudson Bay but could be any big company that makes its own rules), winter, and people's struggle to make their lives better physically and emotionally. The author smoothly switches point of view every break; so we see the story through several characters. The book is broken into sections that describe the theme of that segment: Disappearance, The Winter Partners, and The Sickness of Long Thinking.

Although my nightmare had nothing to do with the plot in the book, for me, a violent movie or book can easily lead to my inner mind coming up with some plot of its own. Because of my susceptibility to this, I rarely read books or watch films with realistic, violent themes. This book, loaned to me by my daughter, was an exception because it's so well written and it hooked me right from the first page.

When I woke up from my first nightmare, because it did have elements that were familiar to me, I sorted through what had happened in the dream. I gathered up the details. Was this my subconscious trying to tell me something? I am not sure but am still considering possible angles. The dream will follow. If you don't like upsetting dreams, you can skip it, which is in italics, and read the my final ideas about it.

The female (let's call her Bee but she had no name in the dream) could have been me but it was more like I was watching this from outside, rather like a movie, which is not unusual in my dreams. Bee had a lady friend where they shared an interest in many things. This friend had a husband who was a painter but not one who had much sold his work yet. The husband was tall, a rather stiff looking man, subdued of personality, wore a hat when out painting, rarely talked, as he appeared absorbed in his plein air oils.

When Bee saw the paintings he was doing of the desert, she loved them and wanted to buy one. She had a problem though as she didn't have a lot of money. The painter told her she could cut off a piece of a painting. They were large canvases on stretcher bars. She considered various angles for cutting it in two. One possibility left an animal that looked like a hedgehog. She didn't want the hedgehog to be the center of interest. Finally she sawed off the bottom third, which left her a pretty nice painting with lots of intense colors. The painter told her he would sell it to her for $350 which conveniently was all she could afford.

Bee was quite happy as she tried to figure out how to get the canvas restretched, right up until her friend showed up at the door very angry that she bought the painting so cheaply. 'Do you have any idea what it's worth now?' her friend asked glaring at her. During the time that this had been going on, her husband's paintings had grown tremendously in value. We are talking tens of thousands of dollars. His wife stalked off very angry at feeling her friend had cheated her.

Bee had a dilemma. Did she give back the painting she had bought even though she had gotten it fairly enough? She knew she would lose her friend over this whatever she opted to do as the friendship had been irreparably broken on both their sides.

This is where the dream shifts and becomes violent. Some punks, guys just looking for trouble and easy money decided to kidnap Bee for what they thought was her wealth given the 'value' of the painting. They offered to ransom her for money but there was no money in her family for paying such a thing. These young people really didn't care about life or value anything except their own violent solutions.

The last scene of the dream had the dead body of a woman and I knew it was Bee. It was now a painting, broad, garish splashes of color and her body lying in the midst of it, as though it had been tossed into a field of huge, garish flowers. Her partially unclothed body had graffiti written across it in grotesque ways. Definitely a vivid, even beautiful painting in a sad, violent sort of way.

Since I had the dream, I have off and on tried to think if it was telling me something about myself. Dreams can do that. When I have particularly vivid dreams like this one, with a plot to them, I take more time trying to think them through. Some dreams I know are just mind chatter, but others are communicating something through their elements or story-- or so I have believed.

Although the violence was probably inspired from reading the book, the plot was nothing like it. The elements of painting and friendships are in my life. Would I demand to keep a painting despite losing a friend? I can't imagine doing that. Am I trying to hang onto something (most likely not something physical if so) to which I have a right but should release? That one I have to think about.

From The Tenderness of Wolves:

'I bury my face in the pillow that smells of must and damp. Its cotton slip is as cold as marble. It is only here, alone and in the dark, that I can allow those thoughts some rein. Thoughts that come from nowhere, from dreams, taking me delirious hostage. I long for sleep again, because only in sleep can I slip the bonds of what is possible and right.

'But as I have found so often in life, what you truly long for eludes you.'

I think the meaning of the dream is your desire to write. You were watching as an observer, your plot unfolding. Very original. You have talent.

I'm not sure what it means either. If/when you figure it out, let me know.

"But as I have found so often in life, what you truly long for eludes you"----the great irony being that, we are what eludes us, which becomes our spiritual path.

Wow, that is some dream, Rain. I'm not good with analyzing dreams, particularly for others, but the symbols seemed to parallel a lot of your own life.

All this churned up by a book. I believe mightily in the power of dreams.

I have read almost no mystery authors with the major exception of Tony Hillerman but that more because if the setting in the Navajo culture and in red rock country I much love.

You bring up an interesting point, mandt, as to whether what we long for is from outside ourselves (places, jobs, experiences with others) or inside and we just think it comes from outside.