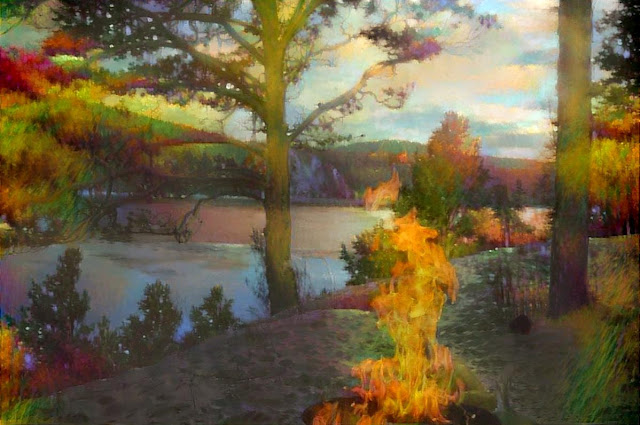 Here we are at another Celtic festival-- actually this one is April 30-May 1 and it's a May Day celebration for many cultures. I still remember May poles, where the pole had streamers and children danced around it. I don't know if that is outdated or now seen as occult. It has another meaning for me-- my father's birthday in 1910.

represents the peak of Spring and the beginning of Summer. Earth energies are at their strongest and most active. Where I live, it does seem more like the beginning of summer than Summer Solstice when we are already in the heart of our summer. There are rituals to welcome the summer. Beltane is known as the time of love as well as hand-fasting. Anytime is good to be a season of love.

I've used Gaelic or Celtic festivals now in three of my books. Beltane became important in the climax to the most recent one, A Price to be Paid. Lammas (Lughnasadh) was in the contemporary paranormal, Sky Daughter. Samhain was in the Oregon historical Going Home). I have Solstices and equinoxes when they fit. I always note these days in my own life, sometimes do a little ritual with them. They are about nature and the earth more than any religion.

In terms of historic meaning in Celtic lands, Beltane was when the cattle were put out onto the wild pastures. Ours are already be out on theirs (as well as beyond where they were supposed to be) as the ground hardened up enough for them a little early-- despite all the rain we've had. The grass though is growing, and it's a good time as summer is my favorite season. 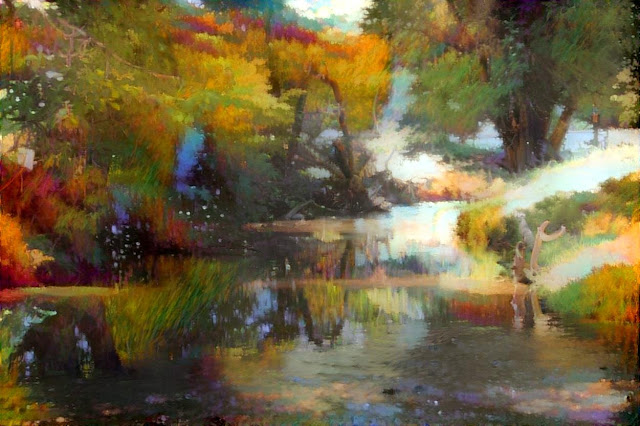 Reflections in our creek 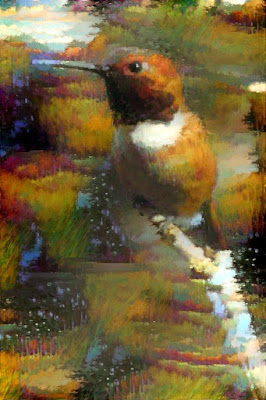 Although I try to keep politics out of this blog, it's impossible for me not to be thinking about it-- especially on what to me are the important issues of our time. We are bombarded by the superficial stuff but real issues-- less often. I thought about it and how I can mostly get it down to one sentence what I believe regarding key issues (with a few that's really impossible.)  I then asked some friends of different political views for their answers.


Social justice-- I'm for it. It's very important
Political correctness-- based on kindness, but it can literally be nuts
Abortion-- only legal until fetal viability (around 20 weeks)
Guns-- legal and regulated (except for extended magazines)
Wars-- don't like them but not sure they can always be avoided
Draft-- convince people the war is worth fighting-- no draft
Programs for the poor-- needed but make sure those getting aid are not fakes
Taxes-- who likes them but also needed for communities working together.
Immigration-- protect our borders-- allow only agreed upon legal immigration
Illegal Immigrants-- remove criminals and path to citizenship for workers
Social Security-- it could be fixed-- why don't they want to do it?
Health care-- make it affordable and available.
Opioids--  watch who gets prescriptions and go after illegal drug traffic
Education-- free through four years of college for good students
Professors-- fire any pushing a political agenda if not in political science
Religion-- not my business until it interferes in mine
Constitution-- add to it if changes are needed, don't ignore it
Environment-- we depend on it, don't forget
Bigotry-- human nature but should be illegal in job, housing, or legal system
Environment-- tooo big for one line. Very important
Global climate change-- lots of questions. Should not be partisan issue.


Social justice-- Do not do to others what you would not want done to you.
Political correctness--Kind words from earnest tolerance.
Abortion--A tragic solution but only a choice in extreem situations.
Guns licensed and not extended magazines and not war weapons!
Wars, NO: Feel adversaries real needs and address them.
Draft--should be obsolete.
Programs for the poor children's health and early education.
Taxes for richest not welfare for the richest
Illegal immigrants are our slave laborers without rights.
Social Security is not welfare but earned.
Health care is a right for all.
Opioids should be last resort.
Education brings tolerance to differences, critical thinking, group creative  problem solving skills, in addition to verbal, math, and manual skills which becomes a life long adventure
Professors and teachers are under respected in importance
Religion is  both very good in serving people but unfortunately a tool for people who have bad intentions.
Constitution was intended to be a living governmental structure.
Environment is the most endangered thing threatening the future of our children
Bigotry should not be tolerated.
Volunteers are the heroes for solving world problems
World citizenship means not doing to foreign nations  what you do not want done to our nation
Global climate change has been hastened by human activities but might be slowed by renewable energy - our best option.


Social justice--  over reaction by news
Political correctness--Man that was "STUPID"
Abortion--provide more birth control
Guns--  too many in circulation
Wars--too many  and weapons too easy to obtain
Draft--should be filled with politians
Programs for the poor--too many and more early education needed
Taxes--  funding too many wars
Immigration-- We are all immigrates at some point in time
Illegal Immigrants-- They force change
Social Security--Are the correct people getting it ?
Health care--Put every American on the same program..Congress !!!
Opioids-- Try Singapore's solution.
Education--Everybody needs a suitable education
Professors-- Stick to the subject and get rid of tenure privilege.
Religion--Not my problem
Constitution--Basis of governance
Environment-- Protect it , if you want a future
Bigotry-- Destructive

You--- if so inclined-- even add issues I forgot. I didn't  put issues in order of importance but just as they came to me. I think they are all important. If you do, copy below and consider bringing back your answers and from what ideology.

image at top from our photo and the Landscape II app at Dreamscope. 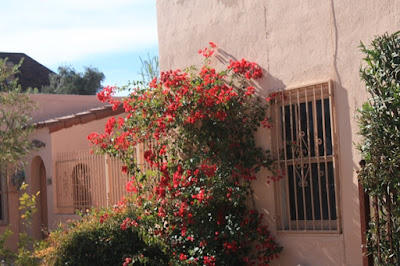 It has taken awhile; but finally, I am back writing the next book (contemporary paranormal, set in Tucson, Arizona). The romance involves the afterlife, reincarnation, and redemption. Big subjects and even harder if you don't have a religious agenda.

In the snippet below, Devi, a natural born witch, is soon to be married (it's unconventional as to why) and driving toward Tucson while talking to Vi, the widow she has hired to be a cook at the ranch. While this book is paranormal, it has a lot of interactions between women-- scenes I especially enjoy writing.


“You are thinking deep,” Vi said.
Devi smiled. “I guess I am. My wedding is tomorrow.”
“It’s a huge decision.”
“It is.” Even more if it was to be like her marriage—purely business.
“Are you having doubts?” Vi asked.
Devi entered and merged into the freeway traffic before she answered. “No, just wondering what kind of man he is. I haven’t known him long.”
“I can see he’s complex. I wish George had been there today. He might have some insights.”
“George is a guide for you?” She rather doubted it given what Vi had told her.
“What else could he be?”
She glanced over and saw Vi genuinely wanted to know. She considered what to tell her. “There are what we call ghosts, who have refused to move on from one lifetime after they die. No authority is over them. Their motives are suspect. So like with Maude, don't trust too much in what they say. Guides operate under rules and with spiritual authority over them. For a muse, you want a guide, not a ghost.” Most of all not a demon, but she didn’t add that. She did not want to frighten Vi. Sometimes what one thought was a ghost actually was a demon. If she met George, she’d know better if that was the case with Vi’s spirit.
“I think he’s a ghost. I wondered why he didn’t come with me today.”
Devi could hear the upset in her voice. She considered that. Her wards had most likely kept him away and would even now, so long as Vi was with her. “Do you need him to be with you?” she asked. She could lift the ward from him. She would only do it under certain conditions.
“I have, but… I will think about it.”
“Good… Did your husband involve himself with the occult when he was alive?”
“I don’t know. What would that mean?”
“You looked at the books at the ranch. Some were dealing with the unknown. It would mean involvement with learning spells, possibly friends into such, meetings where you weren’t included, a sense that he knew what others didn’t, possibly an increasing sense of his own power.” Learning occult powers could lead to ego enhancements with no controls. It often ended up deadly. Again, she didn’t want to frighten Vi. She’d know better only after she met George.
“I need to think about that.”
“Good. You can also ask him when he returns.” She debated telling Vi about the wards. Likely if he knew he’d been blocked, George would tell her.
“I will do that. You can keep him away, can’t you?” Vi then asked.
“I won’t if you’d prefer otherwise-- if he isn’t to be a problem.”
“Problem?”
“Doing things to scare others at the ranch. Ghosts can be mischievous but also threatening—especially if he didn’t like the changes in your life.”


This week, I changed the cover of the book and will share that at a later time. I think the new version better suits the energy of the hero and heroine.
Posted by Rain Trueax at Saturday, April 22, 2017 1 comment: