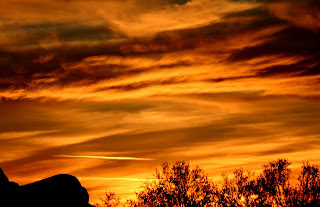 When we arrived at the house, we expected to find a water problem. It was the reason for a trip right now. Something had gone wrong in the house or outside system. We'd had one month-- with nobody living here-- that used 100,000 gallons of water. In a desert that's a disaster—pretty bad anywhere actually.

As a temporary fix, we had asked that the water be totally turned off. That stopped the water loss but left another problem. Auto waterers around the house provide a drip system for xeriscape plantings which though they need less water, do need some. For this reason we felt compelled to find time to come down even in the midst of lambing season. The trip was never intended to be about fun—although I had hopes for some. Surprises lay ahead.

In unpacking the cat (we brought our old one with us), our clothes, and things needed for a month here, I opened a living room closet to see cholla chunks on the floor. I've seen such before and it is definitely not in the good news category. Since most people don’t collect cholla pieces, there was only one possibility… pack rats. No droppings, no sign of a rat having been on the ground. That was good; so what was up? Up was where the answer lay-- a nice round hole had been gnawed in the corner of the closet's ceiling. Then I heard their little bodies scurrying around. Their secure environment had suddenly run into its own glitch.

This is all like one of those mixed blessing. It’s ugh that we have rats in a minimal crawl space, intended only for ducting, wiring and phone lines, between the roof and the ceiling. Whew that we came when we did because otherwise, the inside of the house most likely was next on their emigration plan.

It didn't take long talking to the hardware store and exterminators to learn a few things about the problem. For instance, did you know that they like to eat phone cable? Neither did we but that now meant no extensions in the house. Actually, upsetting as it was, it was not an unusual problem in a desert environment nor in an older home, which this one is with is wires and pipes coming in many places with often a haphazard plan. It also happens to be located in a region considered to be pack rat heaven. They even have a name for them on the poison containers-- roof rats. No kidding. We did find how they had come in but then came how to get them out—dead or otherwise.

In the movie Ratatouille, the rats are driven from their colony's home by an old woman with a shotgun who blasted holes in her own roof in her determination to get those rats. The hero is the rat-- the villain the old woman. After a few days of realizing the severity of this problem and the difficulty of trapping or poisoning these cute little creatures, I began to see myself in her shoes. Too bad the shotgun is locked in the gun safe in or maybe for the sake of the ceiling, that's a good thing.

(The beautiful Tucson sunset was from the second night here. It's an example of how even in difficult times, there are compensations if we look around.) 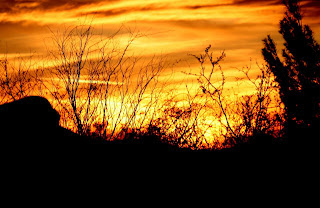 Can you stuff the CAT up there and let her take care of the problem? Just a thought!! stray cats here got under my house, and now I have not seen a rat in MONTHS!

I can only say....you seem to be dealing with this problem a LOT better than I would. If I even see a mouse...I'm frantic to get rid of it. Sending the cat after the critters sounds good to me too Rain....isn't that what they do? Maybe rats are a little more intimidating that squeaky little mice, huh? Good luck my friend...

One hole. Sounds like just one rat? And you trapped it live. Things should improve from here on out. I am hoping for the best.

I am sorry about your rat problem. But the photos are very nice. I just did a little calculation and your rat was using enough water per month for about 48 people. That is a drag in the desert.

Now I understand better, Your are down in the Tucson area, in a house left for itself for longer periodes.

We have a summerhouse, where we live 5-6 months in a row. Until we got cats, all cords were destroyed by mice, and all the shit all over when we arrived in Spring. Our neigbours did have the same problem. But not any longer. We have Manx Cats, and they are real predators.

PS. What a beautiful Sunset.

Yikes. I had roof rats in my old house in Torrance and had to call an exterminator. I've had full on water rats in my house by the ocean.

But, you're right, that sunset you wrote about did soften the stress a little, I trust. Now I'm going to read your other post about the rats.