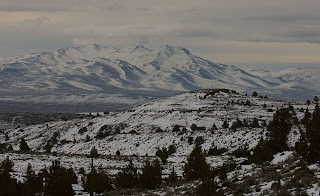 In mid-February, heading south, the scenery changes around each bend-- of which there are not many. Often the snow is right along the highway but the pavement clear. 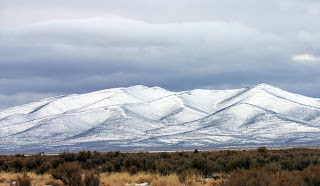 Residents groan that they are due for more snow the next day. This has been a year of more snow than I remember seeing along this route; and although I have never lived here, I've been through many times and in many seasons. 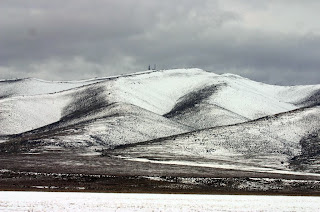 Some don't see the beauty in craggy hills, eroded slopes, barren landscapes. For me, I love the starkness of a desert, the lines, the emotional impact of rawboned ridges, the stories hidden above, and below ground. To see it with snow outlining all of the eroded lines, was a real treat. 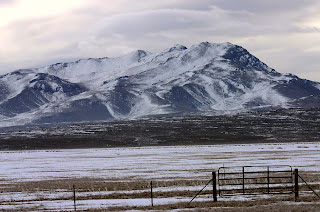 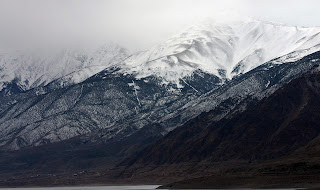 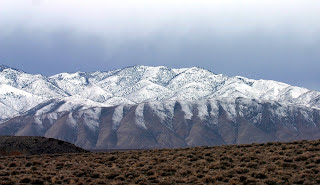 Not many people live in this part of these two states. Some might call this a no man's land. It is a harsh country but it does have its residents. 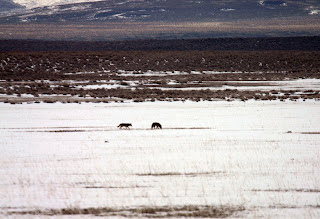 two coyotes on a hopeful hunt 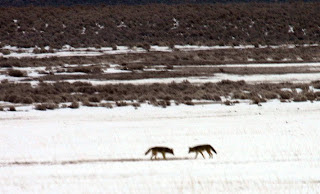 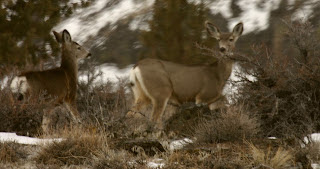 bald eagle in a lone tree 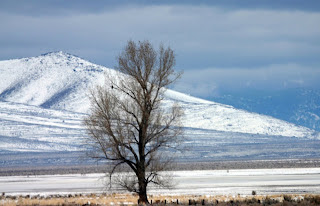 All photos from February 21st, along highways 395 or 95 heading south from Alturas, California to Tonopah, Nevada-- some from the moving car with a telephoto (I wasn't driving).
Posted by Rain Trueax at Sunday, February 24, 2008

I love driving 395 but have never done it in winter, I'll admit. All your photos are beautiful, but I especially loved the 2 coyotes and the deer. Hope you are enjoying Arizona.

I am glad that you were not driving while taking photos! Did you shoot through the glass or open a window for a clearer view? Sometime I'd like to go all the way south to Arizona along that route but I usually seem to be in a hurry to get there or home and I-5 ends up being the quickest.

We are heading south I think. Highway 95 sure looks interesting but I am afraid my husband will be in a hurry to get the drive over with. This will be our first time to do I5 in our motorcoach. Maybe we won't really be comfortable sight seeing along the way in the motor coach. That will be a big disapointment.

Photos are just breathtaking! I blew a couple of them up to fill my screen and just sat and stared for the longest time.

Fantastic, thrilling photos from an extrodinary landscape. Wish I could have time, one day, to drive along this route