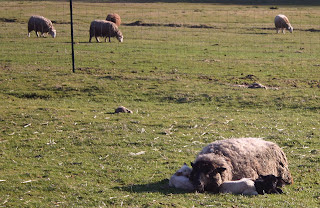 Being out with the sheep, watching the old ones, then seeing the babies as they are born and so quickly are whipping around the pastures, it makes me think about my own aging-- not that I don't now and then anyway. Humans are aware of what animals experience with no expectation, no dread. For them, it is what it is.

Humans are too often caught up in the expectation game. When we are young, it's I can hardly wait until I can drive, or go to college, or get married or or or. Even when we get old, we may wish away days hoping for a change of seasons or for a favorite vacation to finally arrive. We may wish we were back to some earlier point in our lives where we think things were better. If you look at a calendar, how many days on it were spent totally experiencing the day and how many were spent anticipating or regretting something?

The family in which we were raised, the culture where we live, so many things determine what those expectations are about old age. This was an article I saw awhile back (hope the link still works) about one culture's approach to being old and how women there are seen by their culture and themselves-- French women don't get fat and do get lucky

Recently I read a woman in an interview talking about how she wished she had known how cute she was when she was young. Yet, she didn't appear to see how cute she is now; so nothing has changed unless she stops comparing herself against something else and appreciates what is. That's hard to do-- boy do I know.

In making some prints, I was looking at photos of myself from 2000. That's only 8 years ago. How could I have changed so much and boy have I. If I was a sheep, I'd have lived half my age span in those years (if I was one of the lucky ones). As a human, it's only about 10% of my probable life expectancy-- which still isn't nothing.

In the midst of lambing season, we had to very reluctantly put down a ewe with severe aging problems (believe me, you don't want to know what the symptoms were) which no amount of treatment had helped. I really admired her spunky spirit, how she'd be the first ewe out the gate in the morning, the last one to come in at night. She was born on this place. Once upon a time, she had been one of those having babies or bouncing all over in glee. One day they will be her. Life cycle is amazing. All I can say about it is-- make the most of where you are. Never live in the future or the past. Today is all there is.

(The young ewe who looks so exhausted has good reason. She had those triplets that morning. She was lying in the sunshine, gathering her strength. It may or may not be possible for her to raise them all. All three are equal in size. She wants them all; so we shall see how it goes and keep an eye on the weight gain and energy of her babies.)
Posted by Rain Trueax at Tuesday, February 19, 2008

Rain read Alan Watts " What Is Tao ?" In it Watts said,"If we are not totally blind,what we are seeking is already here. This is it. "

Excellent post!!!! I like what you've said here. The trick is living without too many regrets and that's difficult for most of us.

I agree that we need to live for today but also think it is healthy to have an appreciation for our past and to try to plan well for the future. The saying, "Wherever I go, there I am" is true but we do exercise some control over where we go.

WHOO! I would be laying in the sunshine too if I had just given birth to triplets!!

Right now I am so aware of my aging process that it is all consumming! I just want to FEEL GOOD....

Rain, this is a really beautiful reflection. I've thought similar things often, but never so eloquently. The tie-in with lambing touches my heart.

Love the aging analogy of the sheep and us people folk. It was this paragraph in the linked French article that got me:

Recently I read a woman in an interview talking about how she wished she had known how cute she was when she was young. Yet, she didn't appear to see how cute she is now; so nothing has changed unless she stops comparing herself against something else and appreciates what is. That's hard to do-- boy do I know.

That's me! I actually have a date on Saturday night, Rain. I've seen him a few other times and I have jumped to the conclusion we have little in common--but, after reading this article, maybe I shouldn't be so picky.

Triplets -- that's not too common for sheep is it? Hope you update here the ewe's progress caring for them.

I remember a sow that had more piglets than she had teats. A "runt" resulted that had to be hand fed for a while.

Have often thought about how expectations at any age can create many problems in life for us. Really good topic and writing.

Nice bit of writing. Mortality is such a universal topic...