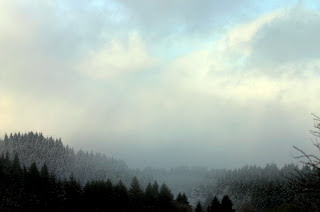 Winter in my part of the Pacific Northwest is not what is thought of as traditional even within the United States. 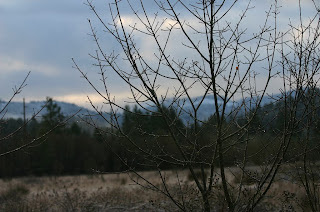 With very limited snowfall, no warm beaches, no swaying palm trees, the Northwest has to take beauty where it finds it; and given the ground is often muddy, that's mostly in the hills and sky. 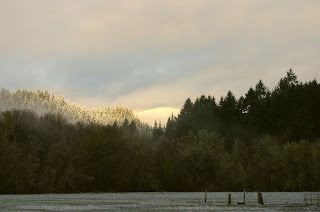 Some might think because the skies are so often gray or cloudy, that they wouldn't be beautiful; but look at how the light hits, accenting here or there, the sometimes yellowish cast to the clouds, how they are in multiple layers of varying types as light changes what is seen throughout the day. 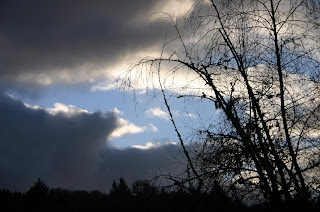 These are a few photos from the Oregon Coast Range-- frosted trees and pastures from a light snowfall, bare limbs, storms coming through and passing on, 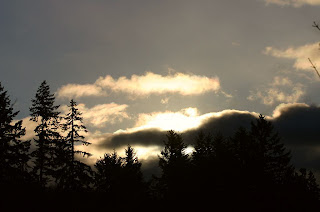 mornings where the sun highlights the clouds as it rises into the sky, doing its best to warm something just a bit, 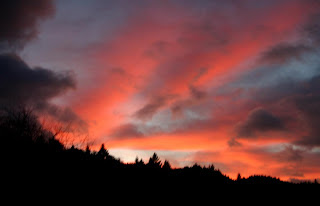 and once in awhile, sunsets where the skies seem to be on fire.

(All photos are January 2008 on the farm. At this time of the year, when I look outside and see something lovely, I grab the Canon Rebel and head out immediately as five minutes later, it'll be changed.)
Posted by Rain Trueax at Wednesday, January 16, 2008

Yes, you remind me of the ever-changing sky of the pacific northwest. When I go through my photo archives, I find sky after sky shots. Stunning when the light relieves the gray.

There is a lot of beauty in 'your' Pacific Northwest Rain...and your pictures are proof. Just lovely.

Every one of these are just spectacular! I especially love that firey sunset. We get those kind of sunsets/skies during the winter here too and it really makes you pause to soak it all in.
Terri
http://www.islandwriter.net

I'm such a So Cal snob; I love the Pacific Northwest, but I get so darned depressed when it stays dark a long time. Because of all your rain, however, your part of the world is so sacredly beautiful. Thanks for sharing.

I am with you Fran. The photos are beautiful but too many days of rain and clouds starts to depress me. It is tough to beat California weather. I guess that is why we all stay here and deal with the high taxes and excessive regulations.

It probably helps to be born here, as I was, but I know even Oregonians can get tired of the gray which is why so many head for Eastern Oregon to get some sunshine even if it is colder. Californians that move up here sometimes make the adjustment fine but sometimes hate it and move back.

My wife moved back up here from So Cal after living there 20 years because she got tired of 80 degree Christmas'. She wanted to have four seasons back. But we do get tired of it and she has agreed to head south on a Snowbird trip next month with the motorhome. Arizona, here we come!

These are just stunning, Rain....One more beautiful than the other! The last two of course are quite startling and amazing...I LOVE the early morning surises like that one you took....and the Fire-Burning-Sky...WOW! All the others are wonderful too...And you get such a "feeling" of the weather with these.....I've never beem up in your part of the wprld, but the more I see of it in pictures...The more interesting it has become to me....Thanks fir this!

Here in Nor Cal we get 40 degree Christmas but no snow in valley and you can be in the snow in about 30 minutes if you choose.
Rain that sounds like many Californians that think Idaho is the answer until it hits 20 below zero then they move back.