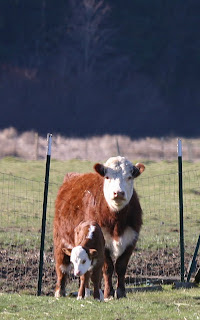 Raising livestock is a mix of joys and sorrows. Nothing always goes perfectly every time. Even when it does go perfectly, there is still the knowledge you are raising livestock for food. Still, it is good more than not good; and therefore worth doing far longer than I might have thought when I was younger.

The calf was born in the pasture and all seemed okay; but the mother loudly relayed through angry bellows that no it was not. So we looked more closely and definitely the calf was lying around too much. We gave it a strong dose of medication. About the time the poop observations said that the calf did have a problem (wrong color and consistency), the meds were on their way. It began to look healthy.

The weather has been frigid at night-- yes, I know not by Midwestern standards-- but definitely by ours. There are four new calves and this one seemed to find a happy community until the nighttime bellows began. Again, Mama was not happy. Time after time my husband would go outside at night-- at midnight (did I mention it was cold?)-- to find out what was wrong, walk the fence line, look for little frozen bodies and find nothing was wrong.

After watching her bellow, staring up toward the woods, I thought maybe a cougar had come down and gotten her calf-- except again there it was in the barn with the calf pile. Even though

we have no immediate neighbors, there are four other homes in this little valley close enough to hear a cow capable of making that kind of racket.

To give ourselves and the neighbors a good night's sleep, she and calf were brought closer to the house and into the sheep's pasture (sheep were definitely not pleased with this arrangement). As best we can tell, she finally is at peace with her baby's health. They have bonded, calf is bouncing around, she is licking it, and (at least today) no longer staring up at the woods.

Giving her the benefit of the doubt, we thought possibly she was looking toward where her little heifer had been born and where she somehow felt it should have stayed. The workings of a cow's mind probably aren't worth expending too much time analyzing. The important thing is she relaxed and is much quieter-- for now-- but boy does she have a set of pipes when she wants to use them.
Posted by Rain Trueax at Thursday, January 24, 2008

Maybe she was just needing some human companionship! She was Lonely!

Actually there MIGHT have been a cougar closer than she thought was necessary. But they are happy now!

I have only heard a cow bellow like that once, many years ago in West Linn, Oregon. Our neighbors had sold a calf, and that mama bellowed and bellowed for days. It was a sound I never forgot, but had not thought of in years. Your story has a very nice ending. Contented cows.

What a wonderful story, Rain. I'm glad that mom is happier now--and that your husband can get some sleep. It's even cold and rainy here in the land of sunshine--flash flood and tornado warnings in Malibu. I walked Cookie briefly, but I felt like your husband--wanting to get back inside as quick as I could.

There is something quite touching about this Cow and her Bellowing...! You really have the REAL Farm animals, Rain...!
What is happening here is minor stuff! (lol)

I don't know what the ordinences are here, but I will find out, if the Chickens, etc., becomes a problem....! Stay Tuned!

Oooooh, they're SO sweet! And what a sweet story.
Amazing how something was bothering mama and she wasn't about to let it go. She had to make sure you kept checking. I'm always astounded when it comes to animals and how the mothers are so astute. That was her baby and she needed to make sure whatever was bothering her was fixed.
Glad to hear she seems calmer now. Are they all still doing okay?
Terri
http://www.islandwriter.net

yes, that calf is doing great. It did take a second dose of strong antibiotic (in two shots over two days) to assure it before they were both let out into the pasture