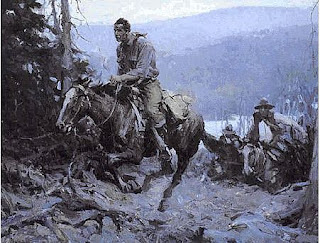 Sometimes when you are writing, things are handed to you where you can only go wow. You couldn't make this kind of thing up. This painting is such a time.

Because the figure on the horse, does resemble George W. Bush, it would be easy to imagine it being used by those who dislike him allegorically showing how he is escaping from an angry populace who have finally realized what he has done to their land, their reputation, their town's budget, their young people who he sent to their deaths. Kind of like a sharp talker who come into town and then had to leave on a stolen horse. (Of course, if it was Bush, beings he can't ride and is apparently afraid of horses, he'd be barely hanging on for dear life rather than riding it capably up that hill to hopefully escape justice.)

The painting was created in 1915 by the artist W. H. D. Koerner to illustrate a 1916 story in the Saturday Evening Post (a major magazine back in those days with many short stories illustrated by famous artists). It first appeared with "The Slipper Tongue" (story about a shyster, who stole a horse to try and escape from the angry townspeople) and then used again a year later for another similar story-- "Ways that are Dark" and finally was sold to illustrate another western in a different magazine "A Charge to Keep."

It's not hard to see how this painting could be seen as a metaphor for George Bush; but the story gets better-- George W. Bush is the one who has given it a position of prominence in his offices as his own symbol to show his missionary zeal. He proudly tells visitors that the rider represents him. He believes it depicts the circuit-riders, who spread Methodism across the Alleghenies (were they chased out?).

Bush wrote in his autobiography, "I thought I would share with you a recent bit of Texas history which epitomizes our mission. When you come into my office, please take a look at the beautiful painting of a horseman determinedly charging up what appears to be a steep and rough trail. This is us. What adds complete life to the painting for me is the message of Charles Wesley that we serve One greater than ourselves."

So here is Bush seeing himself as a proselytizing figure, saving the world and is using a painting of a silver-tongued horse thief fleeing a lynch mob to do it. Could any fiction story get better than that? ( The deafness and blindness of George W. Bush).

Even though we are in an election year, Bush's illusions and delusions matter because he does still have time to wreak havoc, and any level of support from the American people encourages him to do just that. Over and over the story of this man and the tragedy he has wrought upon America is a metaphor of Shakespearean levels.

There is a lesson for us in it too. When we look at that painting with unbiased eyes, we can obviously see a man fleeing, not leading any charge, but how many visitors to his offices have nodded and served to illustrate another metaphor-- The Emperor's New Clothes. Bush has let many delusions influence what he has done and he's found things to reinforce all of that fantasy, but he's not the only one who bought into that.

The lesson for us is strong. Bush has in his office a visible symbol not of the proud charge he has taken on but rather of the lie he bought into. I wonder how many of us carry around outward symbols of things that reinforce our false beliefs, things we have reinterpreted to make ourselves more convinced than ever of what we want to see as truth.

If we see only what we want to see and dismiss anything that doesn't fit, we are like Bush-- horrifying as that idea might be to a liberal. It is worth thinking long and hard on what our own assumptions are about life, what we see around us, and about ourselves. Are they coloring our view of what we observe? Delusions, in the case of Bush, have done damage to the world, but our own do damage to us and our loved ones. They can also lead us to vote for false leaders.

Two ideas come to mind. One, "Art as Metaphor" is one of your best. Two, Bush pictures himself as a cowboy. In the physical sense he is not a true cowboy and cannot ride. The myth of being the savior cowboy isn't just Bush but the cowboy with the white hat is a basic myth of our foreign policy since the World Wars. Bush just used that myth for his own ends.

If Bush feels some deep connection with the painting, I can only that hope on some subliminal level he knows he is connecting with a horse thief. I think it is pure poetry that this painting is in his office.

People like GWB come and go throughout history and the world always has problems. Bush didn't cause them all by any means. Right now he is the whipping boy while others, equally as culpable yet hardly mentioned, get a free pass. Think about it. Could Obama or Hilary or McCain really do any better ? We are going to find out. :-)

The thing with Bush is how he seemingly deceives himself. I think he has taught me that character qualities are a major issue as much as the candidate's political stances. Their personality problems can become huge ones when they have the kind of power that a president has.

Whether any of those, or whoever wins in November, will do better remains to be seen. I hope they are less delusional-- whoever they are. That is certainly not a given though :)