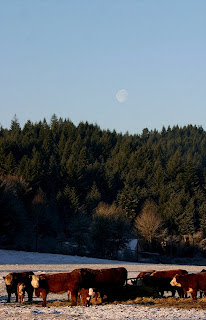 This year, as the media began totaling delegates already won (and they didn't match the numbers voted), eventually a term registered with me that had not before-- super delegates. What the heck was a super delegate? I went looking.

The Republican party doesn't do this, but in the Democratic party there is a protective system in place-- a big one-- to give the party regulars a 'super' say in who will be the next nominee. When someone on the level of Ted Kennedy endorses a candidate, that doesn't just mean they will campaign for them but also are one vote in the Convention regardless of which way their particular state might have voted in the primary. 842 of the delegates are super delegates and represent 40% of the votes needed to win the nomination.

Super delegates are made up of governors, ex-presidents, Congress, and some appointed by the Democratic National Committee head, currently Howard Dean. You can begin to see why it had been difficult for the candidates to stand firm against the DNC's decision to not count votes from Michigan and Florida after those states set an unacceptably (to the party honchos) early date for their primaries. Make the party elders mad and you don't get their endorsement (vote). It's all very well to be noble, but you have to win the nomination to make any difference in the country.

From what I have read, the party's plan was to keep someone like George McGovern (who lost in a landslide) or Jimmy Carter (who power brokers never liked), from ever getting the nomination again. So for a number of years, people like Nancy Pelosi and Harry Reid each have votes for the nominee where I only have a percentage of a percentage of a vote-- tiny one at that.

This does not mean my vote doesn't count but rather that it's critical I do vote and do so meaningfully. If someone wants change, the odds are stacked against them but it's still not impossible. Being aware of who those super delegates are, we can make our opinions known to them for how we want them to vote and remind them of the consequences for them the next time they need a vote.

It's easy to see how people become disillusioned with the political process. On one level after another, it is weighted to keeping power where it already rests-- although sometimes a movement grows with such force that it overcomes all of that.

If, which is not likely, someone got all of the super delegates to back them, then it would not take many states to claim the nomination. Last week, Hillary Clinton already had twice as many super delegates as Barack Obama. That could change if these super delegates sense a ground swell for someone else.

I was not happy to learn about this antiquated system from the 70s. It might play a bigger role this year if the delegate count from the states ends up close. I don't like structures set in place to maintain power. I guess I am supposed to be grateful that there was still a 60% voice for the ordinary Democrat.

Both parties want to maintain our current (for all meaningful purposes) two-party system, but what if New York City's Mayor Bloomberg makes a third-party run and a lot of people, like me, who are fed up with politics as usual, switch? For me, it could be tempting if Hillary Clinton wins the Democratic nomination (more on that next blog).

Same old same old is not my idea of a way to solve what is wrong in Washington. We've seen how well that works since 2006's elections were supposed to make a difference. Many of us, from both parties, have long wanted a viable third party to change the power structure in Washington DC. Maybe this will be the year it happens. No party should take for granted that it has a lock on who the next president will be.

[An interesting wild card in all of this could be John Edwards though he apparently has no chance to win the nomination through the primary system. Democratic delegates are not locked into having to vote as their state went. States are apportioned, not winner take all; so it would be possible for two strong candidates to neither have quite enough votes to take the nomination in August. Even though someone like Edwards had far less, they could become a power broker themselves or even end up with the nomination if they had just enough delegates to forestall the other two from the needed majority. In a brokered convention, something that has not happened since the '70, all bets are off.]

The picture is not of super delegates, but there is a kind of convention going on around the spoils-- and a definite power structure. I had thought it would be interesting to try for a photo of snow, the cattle, and the almost full moon as was setting. I was surprised how far it had shifted in the valley and how much later in the morning it was setting in just the few days since it was really full. One thing is for sure about life-- change is constant.
Posted by Rain Trueax at Tuesday, January 29, 2008

I was not aware of this super delegate thing but it does help explain why we always seem to end up with candidates who feel that the run for President is their "due" even though they are not necessarily the best one. Maybe we need to do away with all this advanced posturing and just go to one vote with all the turkeys err, Candidates, tossed into one pot. Let the biggest vote getter win! Of course, then you would have the large population centers getting all of the candidates time and efforts while we in smaller places are left out. Again.

I was wondering that too, after Iowa when Obama kicked Hillary's butt and she still had more delegates. I looked it up and much like you found out that the political machine really determines who the nominee will be. Hard to believe in this day and age that this still goes on. All we can hope for is that Obama will get enough of the people's vote to swing the super delegates to vote for him. And what happened to the delegates from Michigan and Florida. Does Howard Dean get to say who they are for. That does not seem right either.

Dick that does sound tempting, but you are correct the candidates would focus on NYC, LA, Chicago and Miami and we would never see a candidate in New Hampshire or Iowa again.

I am so glad you took the time to research and explain this, rain. I don't know why I didn't know, but I didn't. The whole idea of super delegates infuriates me to no end.

I would like to see us go back to the CONVENTIONS for nominating candidates, and NO posturing or assigning delegates until then. Back then we never knew who would end up with the nomination until the last day. ANd it was quite a show.

I enjoyed the old conventions with the hats and the confetti and long speeches. It was very exciting.

I did not know this, Rain, and it amazes me that this isn't general knowledge. Sigh. I'm just so discouraged.

Contrary to popular delusions,
America is not a democracy of the 'one man, one vote' kind.

I had not known anything about this 'super delegate' deal.....Lord! Is this Democracy??
It's all too much for me. And it makes me feel that my vote does NOT count....! That in itself won't keep me from voting, by=ut it really is a discouraging piece of news, I feel! Thanks Rain, for posting about this!

FYI: Your comment on my post is interesting to me...and I too feel like THAT was another life...And really, it goes along with your previous post about the seasons of our life....The season of my post feels like it was so long ago, it was a different person, and in a way...I WAS a different person....
It has been wonderful to revisit this period because it was a happy time and a 'building' time.....And I see and remember how young I was....as I said, I was a baby in so many ways....Well, it was that season, wasn't it? (lol)

Whatever happened to the popular vote? Why does my vote hold less weight than the vote of a delegate or super-delegate? Why is this "democratic" voting system controlled by current and former political leaders? Are we the people not trusted to be smart enough to choose for ourselves? And why is the forum different for the Dem's than the Repub's? Maybe they think if they sensationalize and complicate the pre-election campaign enough we'll just throw our hands up and vote from what we actually understand instead of who is right for the job... oh wait... thats exactly what's happening. Thanks for trying to educate us, we sure need it.