What brings you energy?

When I have a dream with some kind of message, I always wonder what it's about. Recently, one night I woke from such a dream.

The basic story was my being in a line of sorts with quite a few people as we were waiting our turn to talk to man sitting at a table. He appeared to be kind of a writer or motivational speaker. What we were to do was come up with a piece of paper on which we had written five things that gave us energy. He would then give us some words of wisdom about what we had said.

By the time I got there, and it seemed to take forever, I told him my first thing which was sleeping in a tent in the woods with a candle for light and a campfire. He looked dismissively at me and said that was a front, not a real thing, that I was putting up a mask of who I really was. Before I could look at the list for whatever else I'd written and see if he'd think more highly of my next choice, I woke up.

Now that was annoying to wake before I got any mystical answers, to have all that time in line and lose the dream before any great words of wisdom came. But I did remember the question, and it made me think later because, when awake, I had a hard time coming up with five such things and that surprised me.

It was easier for me to think about what drains energy than from what I draw it. Writing can be very rewarding, but it takes energy as much as gives it. Yes, there are the times when I write something and feel exhilarated, but equally there are the times it seems to pull it from me. Painting is the same way.

So I was talking about it with Parapluie; and as we discussed it, recognize that there are different kinds of energy. For instance there is physical. Then there is emotional. Probably there is also spiritual if you separate out the emotional from the spiritual anyway.

So it seemed to be a good question to ask here:

Emotionally though what gives me energy, and it gets trickier. For instance I get energy from being at the ocean without a doubt, walking in sand, feeling the wind in my face down there, smelling the salt air-- but the drive down and back on a winding road with some traffic driving too fast-- not so much.

Anyway I'm still thinking about those five things for me emotionally...

Incidentally under that plus and minus category, we got a new cat. I had been wanting a female to replace my little buddy who I lost to old age 2 1/2 years ago. I kind of wanted her to come to me (most of our cats have been strays who were dumped out here); and then in October it appeared she did. She was the cat who was dying by the time she got her, and we had to have her put to sleep.

So on the week-end, I went into the pet store that handles adoptees from a rescue organization (they do such cool work, all of them). I saw the cat. She's very similar in coloring to the one I lost, actually was born about the same time my cat died. She had been adopted two years ago and turned back to the organization in November. She sounded right for us, and we took her home.

Well it's been and up and down since as she's adorable, our two male cats have taken it pretty well, but her--she's had a tough time adjusting to the strange house, the two cats, and us. We had not had this problem before as most of our cats have chosen us since they were strays out there on their own.

Her coming here went through a worrisome phase that maybe she wouldn't like our home and it'd be a bad fit for her. It is looking good now after a tense week-end. She still has a sleeping schedule that is off as in she wants to sleep all day, then romp around the house, running down the hall at full speed, likewise exploring for cubbyholes cupboards that don't close tightly( which means dumping stuff onto the floor), and jumping up onto our bed and rolling around wanting to be petted. I can handle all of that though if she just ends up liking being here. So far it's looking good, but it's been a mix of taking and giving energy. 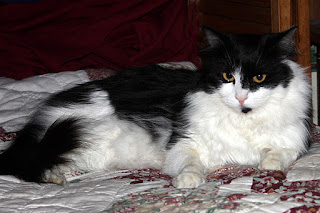 Emotionally....I'll have to think on that awhile as so many things are both plus and minus, including people.

The cat is beautiful and I hope things work out in your favor.

For me---I cannot seperate the Physical & Emotional very well---They often go together for me. I can be energized Physical and feel all sorts of Emotions because of that...And Vica Versa...
So I'm not sure I can give two lists--but I am going to give it some thought.

I hope everything works out well with your 'new' kitty....Very pretty, she is...!

Actually she is now doing great. She does run away a lot especially from the boys; but she sleeps beside me most of the night, rolls around when petted, and yesterday I saw her out here when I glanced over from the computer and she was looking out the window. I don't mind her not wanting to be out here all the time; so long as she likes us and the place. She and our youngest male have been romping around together with so far minimal hissing ;)

Chess brings me physical and mental energy. Bosomy ladies do too. Books as well.

Yep, that would be a cat! romping all night and dumping drawers and cupboards. She'll be fine with the boys once she gets them to realize that SHE is in charge!

You do know cats, Mary Lou and she is adjusting quite well with sleeping with me but romping around at her own rate. It's not us who will be running things with her either. I have found she will get on a drainboard which we haven't had a cat that does that for years. She also looks into every possible cupboard she might open. Definitely some adjusting for us to do :)