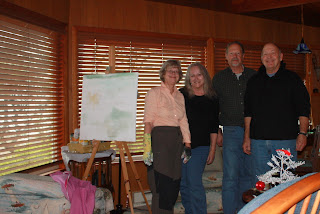 Right after Christmas, Farm Boss and I drove to the Oregon Coast to spend a couple of nights sharing a rental house with our long-time friends, Parapluie and her husband Fisherman. I think I have mentioned before that Fisherman and Farm Boss were friends before either she or I came along.

Through the years, we have done a lot of things together and nothing is better than a relaxing couple of days to talk, laugh, cook, eat, enjoy the beach, read, and watch a movie or so. This trip we got lucky with a perfect storm, lots of wind and some heavy rain but not so much of either as to knock out power or make the drive back home difficult-- well anymore than ever where it comes to Oregon. Photos are from the Seal Rock area to north as far as Neskowin. 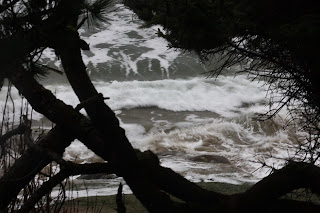 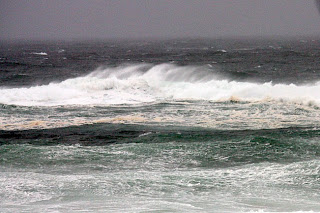 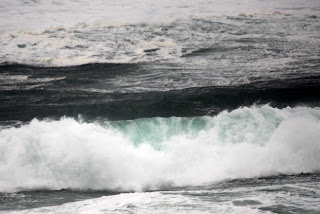 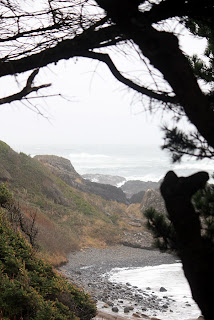 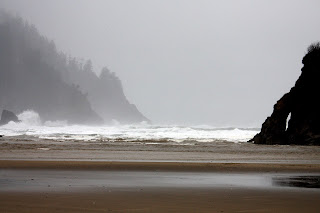 The rocks below look pretty vacant, other than one resting gull, but enlarge the photo. With binoculars and knowing for what they were looking, everybody but me could see the Black Oystercatchers. On blind faith that a photo would let me see them, I shot the rock formation about where I was told they were supposed to be. When I had the photo, Parapluie pointed out their long legs and red bills. Finally I could begin to pick them out also. Talk about camouflage. 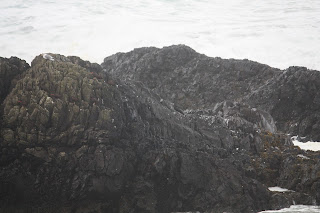 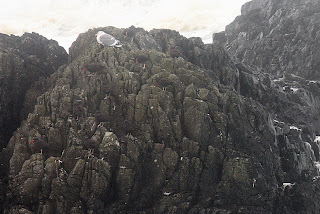 Incidentally Parapluie started a painting of oystercatchers while down there. Before she left, It looked like she had an interesting start on what is obviously a challenging subject
Posted by Rain Trueax at Thursday, December 29, 2011

Beautiful country! I am always amazed at the diversity of One State in our counbtry, let alone ALL 50....It looks like it was pretty 'active', but really beautiful!

Love seeing the Oregon coast. One of the most beautiful places on the planet.

love your photos and they are so helpful because I can see the oystercatchers best through your camera lens. There is also a pluver in the group. It is distinguished by a white belly that looks like the top of a rock.

An awesome part of the world.

I love the coast in a storm! The air is so vibrant and energetic! Lucky you.

Beautiful country in that part of Oregon.

I'll agree that your photos are great. I hope to return to the Oregon Coast next spring or early summer, before it gets too crowded. Pat & I enjoyed our trip there in 2010 and I now have a new camera to take and try out.

I bought myself a Christmas present, a Nikon 1 V1 that is much smaller than my D200 DSLR and I think I will carry it along more often. The D200 takes great photos but only when it is with me and not sitting on its shelf at home.