What you see, when driving through Eastern Oregon (and a lot of the West), will first and foremost be sagebrush seas. For some this can seem like nothing, but I love sage-- the way it moves with the wind, the colors, and the hearty fragrance. In the midst of a sea of sage, is there anything quite so freeing as to see a herd of antelope, wild horses or burros? When you are in sagebrush country, you are where the miles seem endless, borders mean nothing, the sky is huge, and your imagination can soar with the eagles, ravens and hawks.

For me, traveling across this kind of country is enhanced by listening to western soundtracks like Red River, Monte Walsh, Open Range, Dances with Wolves, or Legends of the Fall as this is the country of the Old West. The music helps my imagination create a cattle herd heading over a ridge with a John Wayne rounding 'em up. Actual 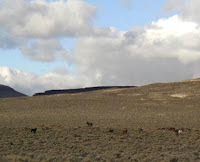 ly the cattle herd doesn't have to be imaginary. This is the land of the cattle open ranging or being driven down the highway.

Always when I am in Eastern Oregon or any of the other states that have lots of sage, I take photos of the hills and canyons trying capture what this country makes me feel. It never can do it as a photo is too small to capture such a b

Around this time of year, I also stop somewhere to cut sage to bring home. I don't take too much from any one plant, and this year sliced off a bit of juniper too. I love the fragrances to remind me of the land, but I have another purpose-- sage smudges.

Theoretically sage smudges are supposed to be white sage, which doesn't grow wild up here and means I'd have to buy it from an entrepreneur or go to New Mex

ico or grow it myself assuming I lived where that was possible. The idea that only white sage is fit for holy work definitely serves a commercial purpose-- some believe a more spiritual one also.

If the Native Americans from this area even used sage for smudging, it would have been sagebrush. Given my spiritual feelings about sagebrush, it's what I prefer and collect it from a place where I personally have felt the energy. When you gather any plant for spiritual work, a good start is to thank it for the gift and don't take too much from any one place.

I know others won't agree, but I believe a person's results spiritually, from any ritual, are more about the attitude and spirit brought to the work rather than what kind of plant. I have bought bundled smudges and don't see much difference for the quality of the experience (yes, I already know I'm not a spiritual purist).

To collect, I look for a place that the energy feels strong (wide highway shoulder helps t

oo), and the sage is tall and healthy. From the past, one of the most beautiful for me was high in the Wyoming mountains near the Butch Cassidy hide-out, known as Hole in the Wall. This time I found a place along the Middle Fork of the John Day River. In the photo, I am standing alongside the plants as I cut off the sprigs.

At home, I put the sage into baskets or something that allows it to dry (for me that usually means most goes outside if I gathered much). This would also be a good time to bundle it if that's the preferred method.

There are several ways to smudge. One is getting a large seash

ell and putting small pieces of sage (cedar, juniper, your choice) in the bowl, lighting it, letting the smoke wisp up. With a bundle (seen in the photo), you light one end, give it a moment, blow out the flame, and move it around just enough to keep the smoke going up as you use it for cleansing, purifying, centering, or to begin a prayer or meditation.

(Although the area I was traveling through in Eastern Oregon has several herds of wild horses from various heritages, this trip I saw none; and the above photo was taken a few years ago in the Sheldon National Wildlife Refuge just south of the border in Nevada. Since last year, the government has been rounding up these horses, wanting to save the graze and water for other animals. I don't know who the groups are who wanted to cut the numbers of wild horses from a few thousand to one hundred (could be environmental purists, hunters or even some ranchers), but I think it's a shame because to see a herd of wild horses is soul stirring; and yes, I felt that way even before I saw 'Spirit'.)

Grand photographs of that wide-open country. It is so beautiful there. I like your explanation about smudges. We burn one every now and then just to "refresh" the house.

I love going virtually on a trip with you to Eastern Oregon. I used to use sage all the time for cleansing and healing, but like so many things that have been so meaningful to me, I had "forgotten" that. When I get home I'll cleanse the room my grandson has lived in the past few years. I forgot to do that, too, when I had the new carpet laid and moved the twin bed furniture back in.

I have never tried sage smudges, but I think I will. When I lived in Nevada, they would round up the wild horses once a year and sell them to the highest bidder, Mostly for dog food! I never saw a herd in the wild and I explored a LOT!

Originally Sheldon Wildlife Refuge was to be a refuge for the horses too and their numbers their grew. That photo was from quite a distance and along the highway but before I had a good telephoto. I have also seen them in southern Oregon crossing the highway. Oregon has several herds. They also are now and then rounded up to keep their numbers reasonable and that make sense but to go down to 100 in the Sheldon seems extreme to me. Just because they have only been there since the Spaniards brought them with them in their exploration, does not make them less valuable to those who value seeing the wild herds.

I guess I will miss out on sage rituals becuase I am allergic. This allergy makes the Oregon Coast a destination of choice. I do like the landscapes of Eastern Oregon very much. Love your photos.

Wonder if I can find some in Ohio! Sounds like a plan to me. My place seems a bit musty and I live the aroma of sage!