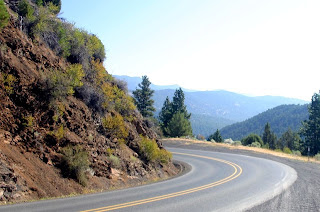 In the midst of the sagebrush seas, across the West, are the mountain islands. Eastern Oregon has several of them all with lakes, rivers and tall pines-- Strawberry Mountains, Steens, Blue Mountains, Wallowas w 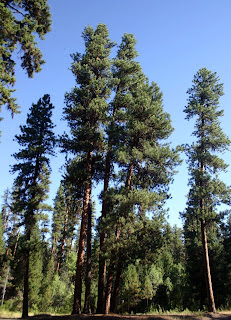 ith sizable wilderness areas in all of them.

Many of these mountains were rich in minerals and therefore the sites of mining towns that sprang up over night and sometimes disappeared almost as fast. Some are now ghost towns but most have a few living residents who either don't like civilization, still pan a little gold, or hope for a new tourist boom. A few have the old store fronts still standing; some have almost completely gone back to nature. Others, like Sumpter, have a few flourishing 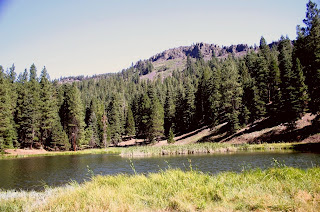 businesses, and new home construction due to second home owners, year round recreation possibilities, and back to nature types.

In Granite, an old-timer (who might have been younger than me) sat in the back of the only restaurant in 'town,' entertaining himself by watching his wife fix our lunch and telling us grizzly bears had been released into the nearby woods by Fish and Wildlife people-- conspiracy music please-- released secretly! 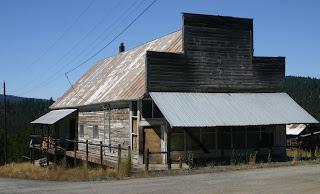 huckleberries and recognized the different shape of the bear's head. She confronted the Wildlife folks, and they admitted they had done it to get grizzlies reestablished in Oregon.

What do you do when someone tells you something like that? I smiled and said, oh my, rather than, I don't believe it! Well, I don't but then who really knows. Wolves and moose have come across fro 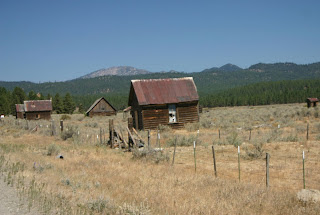 m Idaho, but the general animal population in all those mountains would be consistent with most mountain habitats-- other than no wolves (yet) and no grizzlies.

For me, one of the neatest things about out back of beyond places is the uniqueness of the people who make their living there-- often barely.

In Whitney, a ghost town except for a few somewhat occupied cabins, a sign said speed limit enforced by 30.30. I wouldn't want to put it to the test.

Up a narrow, b 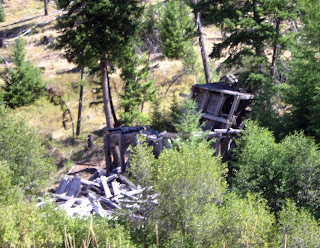 umpy, one-lane gravel road was supposed to be Susanville. Over thirty years ago, when I first saw it, there were quite a few interesting old buildings still standing. This time, everything was fallen down but worse right at the entrance of what might be considered city limits, signs on both sides of the gravel road said private property, no trespassing, local traffic only (whatever that meant).

There was some grumbling about having to turn around after having come up so far on that awful road, but oh well... only to learn later the road was forest service, not private-- not legally anyway. Legal or not, their sign might have been enforced by Smith and Wesson. I prefer not finding out.
Posted by Rain Trueax at Wednesday, August 22, 2007

Old mining towns reminds me of drives we took to Jerome, AZ, in the early '70s. The old buildings looked just that, old. Only a few resident couples lived there, reputed to be leftover hippies from the '60s.

Some years later, Jerome had been newly rejuventated and became quite a tourist attraction as it remains today. The road there leads out of the beautiful red rock country of Sedona, through growing Cottonwood.

So, who knows, maybe some of your mining towns may increasingly become tourist attractions as more people learn of their existence.

Yep, whoever has the gun wins. Whether literally or figuratively.

If you get far enough off the "beaten path" in parts of the South, there are little pockets of what might pass for civilization on their better days. People and places that got stuck in time, usually somewhere in the 40s or 50s. Maybe they were an abandoned mining town. Maybe just a little town that the new Interstate highway bypassed. Or maybe just a couple of families that moved up there on the mountain side 4 or 5 generations ago and have perpetuated their limited gene pool without interference from outsiders. Think banjo player in "Deliverance"...

Regardless of how they got that way, there are a million stories there. But mostly, they ain't gonna tell them to the likes of us...

Thanks for a few moments of special memories. It was like traveling with you to or from Arizona 1965-67. and you would findall the interesting sights of historic note.

That is too bad about the private property signs. I have a big problem with people closing off roads that were built with tax dollars. I like exploring the back woods areas. But these days there are so many people running around with guns growing dope or cooking meth it makes the back woods kind of scary.

And the Eastern Oregon travelog continues--and I thank you since I have never been there--or Eastern Washington either.

Yesterday I drove from Port Angeles to SEATAC, a 3 hour drive, often paralleling the Hood Canal before it cuts over to Bainbridge, Bremerton and Tacoma. Such beautiful country. But, I admit it is very nice to be back in Southern California by the beach. The N. Olympic Peninsula was really cold and rainy this time, unusual for summer.

Oregon sure is Beautiful...!I have never veen there but I so enjoy seeing pictures of all the very many different places and the look of the land. I have a good friend who lives just outside of Portland and I have always wanted to visit Ashland because of the Theatre there....Thanks for sharing all that you do, Rain.