Generally speaking I don't duplicate images here that I posted elsewhere, but I am making an exception with this one which went up in my Gallery earlier. The thing is it is also about the farm.

More than a month ago Farm Boss began working with a neighbor to arrange a lease for using some of their land to extend the range for our cattle. I had and still have some concerns about this but do see the value in doing it. We don't have enough grass to feed our cattle without supplementing with hay which can get costly. Leasing isn't free, but it's cheaper and easier (once the electric lines are up). My concern is mostly along the lines of more predators back there to possibly endanger the calves, but the herd generally stays together at night and should be able to protect their young from cougars. Once they get used to it, they are probably likely to return to the barn or their familiar nighting places when dark comes.

To move them back there has required putting up electric line for the section they will graze (those sections will change), using a solar panel to make the battery work without electricity to the site, and eventually convincing the cattle, who regularly break through our fences, to go through an open gate to the new land. At one point Farm Boss had several of them through when the bull blocked the way and sent them all running back. Now what the heck was that about? Anyway once enough went through, the rest followed and they were in a cow's version of heaven-- new ground and adventure.

When I went back to take photos of them, the lighting was off which meant the photos didn't come out sharp... but they did come out like a pointillism painting which I liked and inspired me to do a digital of the cows and their enjoyment.  So a lucky accident in the photo led to a digital sketch which might lead to an oil painting when I get a break in the other things I am doing.

None of which was what I should have been doing that morning. Sometimes I am sooo easily distracted. 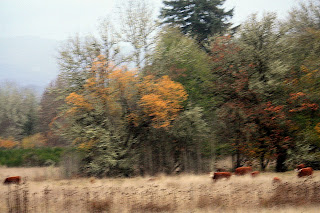 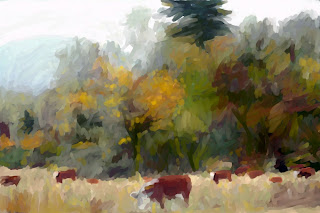 Love the photo and painting.

I can see how photo accidents are an inspiration. This happens to me but I can only work in digital software...no painting talent I am afraid. Both illustrations you have are lovely.

I just love your digital painting of the cattle. I'm glad Farm Boss got them to go through the fence.

Hey all, I'm a fresh poster on this forum so I believe I should give a couple details about myself. Well, I am 24 years of age, a girl, and I enjoy reading english at my college. I truly look forward chatting with you guys... Bye y'all xx