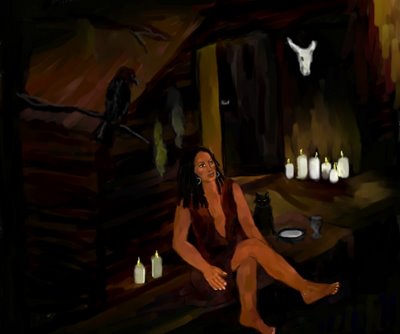 Discussing witchcraft, when I am not and never have been a practicing witch, makes me a little uneasy. Because it is often much misunderstood, I feel it something important to write about along with the other spiritual topics I have explored. I studied up on it some years ago to write a story where the lead character discovers her grandmother was a practicing witch. She comes to learn what that means-- as did I in my research.
Some think witchcraft is connected to Satan; and rituals, like with a stag's head, could be part of why, but it is not. It goes back to paganism, to Celtic practices, goddesses, the uses of herbs, rituals, and moon cycles as ways to help one's own life and that of others.

I find witchcraft interesting, always enjoy learning more about it, and have known a few witches. As I said, I am not a witch, but I have a few of what I call pagan practices like Tarot cards, astrology, using aromatic oils, and have been learning palm reading which are within witchcraft. The main reason I wouldn't be a witch is I am not into being part of any formal religion at this point in my life. I most definitely don't want to cast spells and take the responsibility onto myself for changing someone else's life-- even if I believed I could. But I don't see witchcraft as wrong if it's practiced properly. Naturally in all spiritual practices there can be wrong and right uses of power.

With the work of witchcraft, the beginning is casting a circle and within it will be done sacred rituals. I have read a lot of ways to cast a circle but the essence is an awareness and meditation on the four directions, four colors, and four elements-- fire, water, earth and air. For anyone interested in learning more about what that all entails, which is not my purpose here, there are a many books on the practices in metaphysical sections of bookstores. To cast a circle, there is no need to desecrate the land, to build temples. The ground becomes sacred for the time of the work. When the ritual is finished, the circle is released and the land returns to what it was before.

In olden times people thought to be witches were burned in Europe and killed in the United States. Some of that was fear, of course, but some was because midwives or healers competed with doctors and sometimes were more successful. Remember back then doctors would go from doing an autopsy, treating any manner of illness, and immediately treat the next patient without washing their hands. Their idea of medical care was bleeding an ill person. It's not surprising that a neighborhood witch, with a knowledge of herbs, might have had more success than the doctor was having.

After the times of the Inquisitions and burnings, a lot of wisdom regarding herbal medicines as well as spells went underground. Some might have been lost, but it is slowly coming more into the light at least for now. It is still often misunderstood; but if one thinks of it as an earth religion, basically a form of paganism, it might not seem so evil or frightening. Things many people take for granted today like astrology, tarot cards, palm reading, collecting and growing of herbs and flowers to be used for healing, aromatherapy, energy transfer, understanding of the earth and moon cycles are all part of basic witchcraft.
Do witches really fly through the air, change into animals, make their enemies sick? None that I know, but I don't know what is possible. It's not likely to be the average experience of most witches. Mystics of all religions have had supernatural powers that most of us don't understand or even want.
Perhaps some of how threatening the practice of witchcraft might be, even if the coven attempted to use black magic, would be dependent on the spiritual power of the ones they were attempting to harm. Whether you believe in Satanic power, black witchcraft or even the ability of a Christian to pray bad onto you as punishment, it behooves you to be strong spiritually yourself.

If a witch properly understands her craft, she would not do evil to another even if she could. The belief of some is whatever they do returns to them three-fold. That might or not be true for what would happen, but if some Christians, who are so free with praying God will smite some person they regard as evil, were as concerned it'd bounce back on them, they would regard prayer a bit more cautiously too.

When I saw the last Johnny Depp pirate movie-- Dead Man's Chest, I was taken with the imagery in it and in particular that of the soothsayer. I decided I wanted to do a computer painting of what some regard as the dark-side and that is what accompanies this blog.

I thought it was interesting that the woman in the painting came out looking like an older version of the girl in my dream painting for The Wild Ones. Perhaps this is where that girl went to gain power to protect herself from a brutal husband who was chasing her. In those times, a mixed blood, poor woman, would have had few choices for how to protect herself. Certainly the culture wouldn't do it for her. This new computer painting has made me more and more think that dream might have been intended for a book someday and pieces of that will keep coming to me.
Posted by Rain Trueax at Saturday, September 16, 2006

I am not a witch either, but have studied it and have gone to some rituals at the Long Beach Unitarian Church. My daughter thinks she is going to take some Wiccan classes at the local metaphysical bookstore and it will be interesting to see what she thinks of it. I have no problem with white witchcraft which I think of as earth-connected. I am terrified of black witchcraft! By the way, she does look like the woman in your dream painting--but, she also looks like you.

You have brought up a subject that I know nothing about. There is a lot of lore about witches & it is sometimes hard for me to sort out the fact from fiction. I feel there are many connections between Christianity and much of the Earth based beliefs. It is an interesting subject.

My tenth great-grandmother, Sarah Warren Osborne, was one of the first three women accused of witchcraft in Salem. She died in jail, waiting to be hanged. For her, an argument over land and marrying her indentured Irish servant led to disaster; there was no need for any practice or even knowledge of how to practice witchcraft.

"... in all spiritual practices there can be wrong and right uses of power."

We certainly have some prime evidence and manifestation of that going on today... from Washington DC to Baghdad to Kabul...

Like Dick, I know nothing about witchery, but for some reason do find it fascinating. There is a certain allure that is in some way quite sensual, even sexual, in nature. I have never known a witch, though I'm quite certain that a couple of ex-wives were witches. Of course, I spelled it differently...

I studied practical magic for over a year and do assoicate with "witches" I do not and will not do spells that affect others. That changes free will and brings the law of Karma on to me. I do attend rituals but don't always cast a circle. You will probably find most witches do things differently. That is one of the nice things about this religion. Most follow the Goddess and the God, and you find bad people along with good as in any thing else. I think you have made some really good points in your blog and I enjoyed it. Thanks

Am I understanding autumn correctly? The picture I get is there is not one right way to practice the pegan religion. We are all on our own spiritual journey. Some in groups and some not. It does not matter what you call yourself - a witch or a participant in a Wiccan class or Christian or Jew or a loaner with a personal philosophy. Elements of the oldest pegan religion has continued with the major organized world faiths. In addition the most commendable attribute of witchcraft is the connection to nature and the commitement to the preservation of nature.
I am happy to see the development of a book from the wild woman dream is alive and progressing. The painting has some mystery in the shadows a few lighted forms are there.

I live in Boston, just a few miles from Salem, Massachusetts. They have actually erected a statue there with an image of television's "Bewitched" character. It is a terrible misunderstanding of how real women were persecuted in the 17th century for 'suspicion of witchcraft'.

Though I've never really read that much on witchcraft, my eldest daughter has been fascinated by it and Wicca and has several books about it. I've paged through them with a mild interest in finding out more; but I'm more the etherial type...angels, fairies, etc. fascinate me.

The term "Witch" originally meant "Wise One", and later, "Wise Woman". Witchcraft honors the Crone stage of life. I enjoy being a Crone! Echo