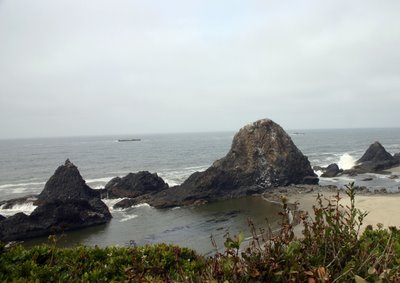 When the valley is hot, the air along the Oregon coast can be nearly cold with a heavy fog blanket overhead, but today on one of the last days of summer, it was pleasantly warm. The rivers on the way down were full of boats with fishermen trying for the salmon as they return. The sidewalks in old Newport were crowded with tourists and families down for the last long week-end before school starts. 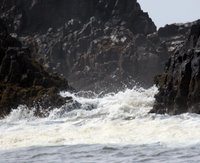 Here at Seal Rock State Wayside, there were not many people-- somewhat helped along by a small parking lot. A few lovers strolled hand in hand along the edge of the water. One family had built a fire to roast hot dogs while the kids and their father (grown up kid) got a kite high in the sky.

As the fog burned off, the sunshine was almost hot and full of the cries of gulls and cormorants, the bark of the seals hunting just offshore. The waves crashed against the rocks, and the air had that

wonderful smell of salt. Some say it's also full of ozone and that's why it's so relaxing to be along the ocean. It was a day to wade in the surf, sit on the warm sand and just be.

I have had many days along this coast. There were those when I was a little girl, my father holding my hand in a wind storm when I was afraid I'd blow away. Then with my own children, brushing tarry sand from little feet, watching sand castles grow along the edge of the sea. And now the world changes again and I'm growing old; but the sea and me, we are still both here-- for awhile.
Posted by Rain Trueax at Monday, September 04, 2006

As one who must be within a few months of being the same age as you, I also hope we are both here for quite awhile longer. But I have another memorial service to go to Tue for a friend who was about our age. I guess that will be one of the sad parts about growing older.

The ocean beach is wonderful at any time of the year but it is so great when the weather is good enough you can sit on the sand & enjoy the sun. You look good and very comfortable there.

Lovely to read your memories of this beautiful place...Especially given you have been visiting it foir all your life. That is wonderful!

Yes, Earl H. is a lovely man and a good froend for over 40 yesars! He is a great Animal lover you know. He has been President of Actors & Others For Animals, a wonderful organization here in Los Angeles, for over 30 years....! (I was actually on "Policewoman"...! Bit part!

There is nothing quite like walking along the shore of the ocean. It seems as though you had a beautiful day to do just that. I live so close that incorporated into my daily walk is a nice long stretch alongside the Pacific. It's so nice that you have memories dating back to childhood of the beach that you walked in the picture!

I have GOT to get to the Oregon Coast one day soon. I have read so much about it. Washington has a beautiful coast too, but most of it is on Reservation Land, with no access except feet, which I cant do much of!

You look so d in that picture, which is why most people do go to the beach!

Rain - you are so beautiful - mind, body and spirit. I love the Oregon coast. In 1969, I spent a summer living in a little house at Yachats, just across the highway from the ocean. I know Seal Rock - thank you for sharing your memories and yourself.

This post was beautiful and heartwarming. The sand and the beach...I LOVE IT TOO! I just kind of melted away as I read it...thank you.

For a good long while, Rain, but I sure know what you mean. What a great way to spend Labor Day.

Nice pictures. Beautiful place. Sounds like you had a great time.

Your post transported me, Rain. I just wish I'd brought a jacket!:) Yes, you truly are beautiful inside and out!