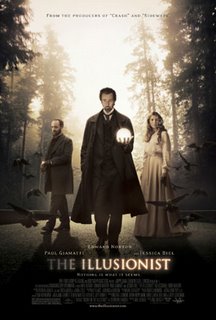 If you like films to make you think, with mystical concepts, stories that unfold as you get to know the characters, and if you enjoy a movie that has you thinking about what really happened days later, I recommend you consider seeing 'The Illusionist' in the theater.

Given how far out I live, only rarely do I get to movie theaters. This is one I knew I should see as soon as I read about it. I saw it this last week-end, and it satisfied on so many levels that it's hard to know where to start explaining why it's so good. When it comes out on dvd, I will be buying it to add to my mystical film collection.

'The Illusionist' stars Edward Norton, Jessica Biel, and Paul Giamatti. The reviews I have seen have been mostly positive but it clearly is not everyone's cup of tea. For me it was a perfect film to consider supernatural questions, love, and mystery. I think calling it an adult fairy tale might be the best simple description.

Is it magic or illusion? That's one of the questions to be considered. The film doesn't answer it. Perhaps in the end, it's some of both. I would tell more about the story, but it's best to not know too much. Go expecting to be entertained but also to consider what is real, and I don't think you will be disappointed.

Trailer for The Illusionist
(Image from http://www.thehollywoodnews.com/images8/the-illusionist/ILLUSIONISTFINALposter.jpg)

I've just watched the trailer Rain...Yep, it's one I'd like. Thanks for letting us know about it.

That sounds good. Maybe I'll try to fit it in during the next week.

I just hate to have to pay out the cost of the admission! I will have to wait until it comes out on DVD and then rent it.

I'm sure it'll be good on dvd too, Mary Lou but be sure you check what age senior rates kick in for your theaters. They vary from 55 to 65 and I always ask to see if I can get the lower rate. When you do, it's not much different than renting the DVD-- unless a movie isn't complete without popcorn :)

It's on my list of movies to see and yes do check ages and also the matinees too as they are cheaper.

perhaps this weekend - thanks Rain

Thanks for this heads up, Rain, as I rarely go into the theaters unless something really grabs me. This does sound like my kind of movie. Ed Norton reminds me so much of my youngest son Tony--and the actress is so beautiful. Like Mary Lou, I usually wait for the DVD, but heck--I don't have plans this weekend except for my grandson's Friday night lights.

If any of you see it, let me know if you liked it. I do believe in going to some movies in the theater to keep that kind of movie being made. DVDs have spoiled me for theaters and I much prefer them. I also realize it takes them doing well enough in the theater to see more of the type I like being made.