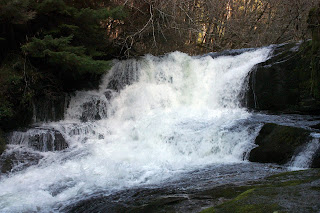 There is a theory that it's the ozone in the air both at the ocean and at waterfalls that makes them so calming to humans. I don't know what it is, but waterfalls definitely restore my energy. The photos weren't as great as they could have been as the falls are in a narrow canyon where the sun wasn't hitting the water when I was there. Next time I'll arrange the timing better. The beauty of these falls was both in the movement of the water and the interesting shaped rocks alongside them. The rocks were covered with moss, adding to their color but the lack of sunshine made it difficult to show water movement while also the green of the rocks which is why I did a digital painting that showed better what I was seeing. 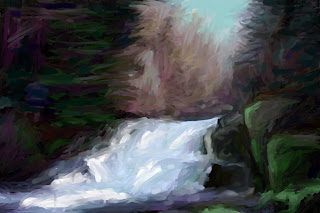 All photos are from [Alsea Falls] on the South Fork of the Alsea River. We parked alongside the gravel road and took a short trail to below the falls for these photos. During the summer they say swimming is possible. I'm ready to go back.
Posted by Rain Trueax at Tuesday, March 02, 2010

The photos and artwork are really great, rain. Definitely capture the beauty and energy.

No matter how many techniques I’ve tried, I never remember my dreams. My teachers said that’s all right. But I do have a recurring vision just before falling asleep, a waterfall, and I am the water. The rocks tickle as I glide over and fall to splash into myself.

Only 45 minutes from home... my wife and I will definitely make a few trips to Alsea Falls.

What a beautiful place this is---and in summer it must be gorgeous. Lovely pictures and lovely painting, too, Rain. I can see why you want to go back.

I like Jung and have thought he was better than Sigmund Freud or Adler at psychoanalysis. But the test mentions watching TV soaps. Maybe I missed somethingbecause I don't think Jung composed this test.