Wolf Attack! Are you kidding??? 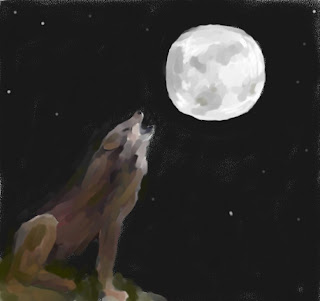 I find wolves fascinating, love to see them in Yellowstone, watch them from a safe distance, hear them, read about them. In art, they are a beautiful addition to any painting, but...

Humans have a tendency to forget that we are animals and actually more prey species than predator unless we have a weapon in our hands. For years we have been told wolves won't attack humans, but I have always thought-- why not? We don't have as thick of hide as some animals and what exactly would stop a wolf from thinking we look like walking steak?

After reading about [a young teacher killed by wolves], I went looking for more information on exactly what happened and came across another article which I had not heard about when it happened likely because the man was not killed.

Wolf Attack
Although I live close to predators, unless I am on vacation I am unlikely to come across a wolf pack; but on the other hand, I can come across other predators, some big enough to kill humans if they were so inclined. I believe it's important for anybody who is out in the woods to be informed on what to do if a predator turns aggressive. Thinking about it ahead of time is a lot wiser than waiting until it happens. There is a lot of information online about how to handle yourself if a wild animal becomes threatening (people have been killed by deer-- and don't laugh, it's true).

Where I live in Tucson, we have javelina, bobcats and coyotes that I have seen close to the house. None of these would approach our farmhouse in Oregon. Other than the javelina, which are not in my part of Oregon, why do you think that is?

Logically, you'd expect the Tucson house, being closer to other homes, would have less predators at the door. The reason that isn't so is guns. I know. I know. It's upsetting to a leftie to imagine a gun is needed for anything, but here we shoot at any predator that gets too close. Down there we are in the city and for good reasons we can't use a gun (of course, if a predator shows up in the house, all bets are off).

When a person is hiking with the approach of a predator, there are certain things the human can do to dissuade an actual attack. Sometimes though it's too late and the attack is on before you realize it.

My opinion is if you are attacked, with no clubs handy, and it's a real attack, go for the animal's eyes. No wild animal wants its eyes gouged out. I am describing an attack much closer than any of us wants to experience; but if it happens (human predator also) go for the eyes. It's the one chance when we are the weaker of the animals.

With a wolf pack, such as killed the Alaskan teacher, she didn't have a chance. More than one animal, darting in and quickly back, there wasn't much she could do. Wolves are very fast and they know how to disable their prey. That kind of attack is very rare, but incredibly sad. It's not good for the wolves either for what seems like an easy meal will end up being the end of their pack.

In researching this, I came across the following article on avoiding or diverting human predator attacks and thought most of it can also apply to the wild animal type. It pays to be prepared and make sure your loved ones, especially children, are also prepared whether in the wilderness or closer to home.

Hmmmm I hope I never have to contend with that.

I love the pictures.

Well the article is actually on the kind of predator that anybody could come across-- the human sort. Nobody is immune to it and among other tips, it repeats something I have read before from interviews with predators like Ted Bundy, they look for the vulnerable, the easy prey. Our best bet is to not put ourselves in that position because it's easier to avoid it than deal with it after we have been targeted. :(

Six and a half billion people on the planet... at some point encroachment begins to happen, initiated at times by the predator, and sometimes by the prey.

If javalinas are aroud get up a tree or up above them-so I was told as a boy in Tejas...:-) Humans predators look for weakness. Always be aware of your surroundings. If attacked defend yourself by any means possible !

I have not seen Wolves up here, but they certainly could be around--we have Cayotes and Deer, of course. I use to see more of both when I was out and about more, but I am sure they are still around. Being prepared for any and all of these contingencies certainly is a very important thing. Though, as you said, that poor teacher didn't have a chance. The Human predator is even scarier in a way....
Thanks for ALL this Info, Rain....

Thank you for the links. That one on human predators was an eye opener. I've always thought of people who prey on other human beings as being criminals but not predators. I see I have been wrong and that by perciving them as just criminals I've really underestimated the danger they are to me and everyone else. My mindset is changed now.

I read recently of a young musician killed by two coyotes in a park in eastern Canada. She had just gone in for a hike before beginning a tour. Whenever we go out hiking I think about the animals we might encounter. Around here it could be bobcat, coyote, bear or mountain lion. I never hike alone.

I like seeing them all. We live quite close to a wash, which is basically a wildlife highway. There is plenty of food for them and they all seem healthy. I don't underestimate the potential danger though. A few years ago, our neighbor's beloved dog had her belly ripped open by javelina. She died on their front porch. Definitely they can be a hazard to pets but can hurt people also. I still enjoy seeing them but we have heard this year there are more of them and they have been more aggressive, threatening to the neighbor when he was taking care of business outside.

Where I feel sorry for them are all the walled communities. In a place like ours where it's open desert around everyone's home, their habitat hasn't changed much but a bit north of us, it's all much more walled off and increasing numbers of box stores. It's sad for the wild things that must figure out a new place to go, encroaching on the territory of others to do it.