In my younger years, sexuality was a factor in working out dreams... Was I the madonna or Madonna (in my generation that would be Monroe)? Which should I be? In my imag 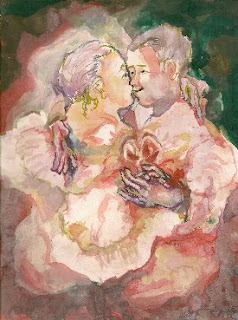 It would have seemed to me, back then, that by the time I reached old age, those questions would have long ago been answered and cast aside-- or would they?

Kama Sutra sixties is a discussion of Diana Athill's book, 'Somewhere toward the End,' where she writes about her sexual experiences in her 60s. A few years ago the elder memoir was by Jane Juska, 'A Round-Heeled Woman,' about her desire to experience hot sex again before she got too old for it-- the kind of sex that had no strings attached (is there such a thing?). All I can say about Juska's book is-- who imagined this was hidden in English teachers and that in literary personal columns lurk the same things you find on any internet match site?

Is a dream of an active sex life part of most people's elder years? By the time one reaches their old age, is it about memories or do all the sales of Viagra say that doesn't end? When estrogen and testosterone go, does sexuality-- by that I don't mean just having sex but seeing ourselves as sexual beings? Some think the very idea of elders being sexual beings is repulsive. 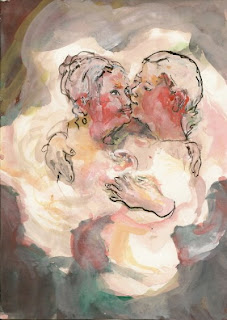 A few years ago I read that at places like Sun City, Arizona there was a lot of sexual hanky-panky going on. Hiding in the bushes down by the golf course were couples-- not married to each other-- having secret assignations. This news was particularly upsetting to young people. Grandma or would that be Great-grandma??!

We see very few movies about sexuality and elders. The comedy, Something's got to Give, from a couple of years ago starred a sexy looking Diane Keaton (in her late 50s at the time) and does Jack Nicholson ever get un-sexual?

Some want to have sex as part of their lives until they die. For others, it's a relief to put that behind them. Some consider the very discussion unseemly. I don't know about you, but for me, as an observer of life, I like the mental image of two old people in a nursing home still getting hot and heavy (using protection but of course).
Gouache paintings of elder love and dancing the tango by Diane Widler Wenzel (Parapluie in the blog world). The first painting has the couple seemingly coming out of a flower which is the gardenia. It represents young love as so often it is the flower (or was when she and I were young) chosen for corsages that boys gave to their dates before proms or homecomings. So by using the flower from youth and the old couple, the paintings seem to span the years. The tango was inspired by her recent cruise in South America with her husband. To me, they illustrate that sexuality doesn't have to belong to youths.

For more of her paintings check out Umbrella Painting Journal)
Posted by Rain Trueax at Saturday, February 28, 2009

I remember as a kid watching "Harold and Maude". and have always wanted to be Maude when I got older. Or at least, Ruth Gordon! ;^)

Thank you Rain for inspiring me to paint these for your post on Sex and Old Age. I enjoyed painting them. and look forward to doing more elder tango sex. I did see elders learning the tango on the cruise and was touched by their tenderness of their body language.

I'm so glad the first commenter, donna, reminded me of Ruth Gordon's Maude. Such a wonderful character, full of life, and yes very sexy in her older years. I have always wished our culture was healthier about sex. The myriad of images we are bombarded with runs the gamut from reverential to degradation. How we piece together our personal interpretations is the work of a lifetime.

I enjoyed the paintings and feel that sex doesn't have to end as we get older. Of course, I may change my mind when I do get old, although I am not sure just at what age that happens.

It's been several years since I last had sex, and amazing to me I don't miss it. I guess the hormonal shift happened and it just isn't a big deal to me now. Used to be.

Other night while waiting for a streetcar, I got into conversation with a stranger who turned out to be a visitor from another city, we kind of hit it off and sat together on the streetcar for the 20 min ride to my stop. We flirted like crazy and I loved it, but got off at my stop never to see him again, just enjoying the glow. I think that's what I like about the hormonal shift, I can enjoy the moment and move on without regret or longing for more. Perhaps one day the flirt will lead to something more, perhaps it won't, I can enjoy it either way. Never could do that before.

There's so much to do, so little time, no point regretting what isn't to be.

Hi, guys! I have problems with potency ... I need your help! Did you have it?