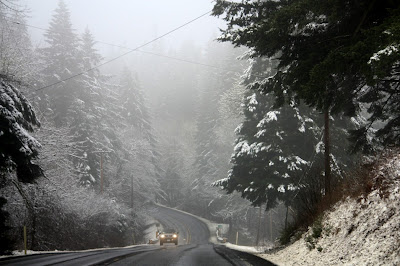 Driving to the Oregon Coast means crossing over a range of hills that usually don't have snow on them but always warn it's possible. The route we had chosen was the Van Duzer Corridor where the highest point is around 730 feet in elevation... (some say less). In the part of Oregon where I live, elevation is pretty much everything for whether or not you get snow when the weather turns cold. 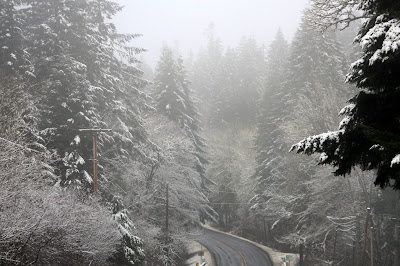 Because we had seen around us that the highest hills had snow, we might have thought of the possibility of snow on the roadway but we really had not. While it's pretty, it's always a bit of a concern when driving-- mostly for what other drivers might do. 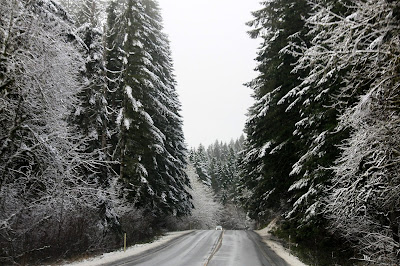 Momentarily, when we saw the roadway ahead, I thought maybe we should turn around; but Farm Boss, who does most of our driving, was on a mission, besides which living in the country, he's not unfamiliar with driving on icy roads. We had the truck with 4-wheel drive if we needed it. 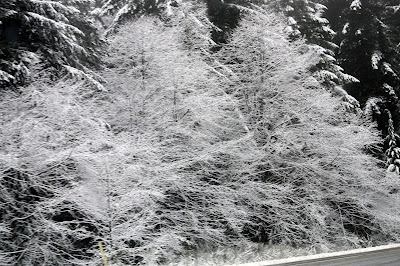 I must say it was very pretty with the snow icing all the branches and turning the trees into this snowy corridor to pass through. Icy conditions didn't last too long, before we dropped back down in elevation. It seemed most drivers were being sensible. We did see snow mixed with the rain the whole time we were at the coast but on our drive back to the farm (we made a loop), that pass, which is even lower, was clear.
Posted by Rain Trueax at Wednesday, January 12, 2011

It's nice to have actual "seasons". I grew up in California where there were two: rainy and dry. We used to get out of school early on "rainy day session", unheard of in Oregon.

My wife lived in San Diego before we met. They only had one season there. She missed the other three badly.

Beautiful photos. I have had enough winter. It has been freezing cold here for too many days this year.

Good to see you got out. The drive to the coast is so restorative. The pictures are gorgeous.

Wow--theses are fantastic photos. I'm going to share a link to them on my winery's Facebook page when I am back at work tomorrow. (Van Duzer Vineyards)

The photos are beautiful. We went to bed Tue night with about 2" of new snow on top of what was already there and woke Wed morning with almost all of it gone! Amazing what can happen to that stuff when the temp goes up to 43 and a fairly hard rain starts and all that happened during the hours between about 10pm and 7am.