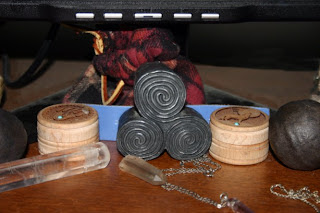 "Yippee, it's Groundhog's Day," yelped my five year old grandson as he jumped out of bed February 2. His mother thought it was cute. His grandmother thought it was cute but didn't realize there was more to the story.
When Robin Andrea posted the word ancient Celts used for this time of the year, the almost springtime, Imbolc, it got me to thinking about the natural rhythms of life, about paganism. We live in a culture that more and more is disconnected from the physical world. We think we can control everything. Some have come to believe there's no more need to pay attention to what the earth is doing. We are beyond that....

I was reading Morning Donut and the writer put in a quote that I loved. It so much applies to the topic of nature as teacher and guide to the sacred:

"Knowledge is awareness, and to it are many paths, not all of them paved with logic. But sometimes one is guided through the maze by intuition. One is led by something felt on the wind, something seen in the stars, something that calls from the wasteland to the spirit." by the writer Louis L'Amour

We can feel these natural rhythms of life if we are out in nature very often. Groundhogs Day is Imbolc. It is the day that Celts took time to stop and celebrate. Here is the link again to the Imbolc explanation of the various ways February 1 and 2 have been celebrated (including Christian) and following are two short paragraphs from that website:

"This season belongs to Brigid, the Celtic goddess, who in later times became revered as a Christian saint. Originally, her festival on February 1, was known as Imbolc or Imelc, two names that refer to the lactation of the ewes, the flow of milk that heralds the return of the life-giving forces of spring. Later the Catholic Church replaced this festival with Candlemas Day on February 2, which is dedicated to the Virgin Mary and features candlelight processions. The powerful figure of Brigid, the Light-Bringer, overlights both pagan and Christian celebrations.

"In most parts of the British Isles, February is a harsh and bitter month. In old Scotland, the month fell in the middle of the period known as Faoilleach, the Wolf-month; and it was also known as the Dead-month. But although this season was so cold and drear, small but sturdy signs of new life began to appear: Lambs were born and soft rain brought new grass. Ravens begin to build their nests and larks were said to sing with a clearer voice." by Mara Freeman
To be aware of such changes, to honor the cycles of life is paganism. Often the practices of paganism have been grafted into Christianity with many Christians oblivious to their source--like Candlemas Day.

For many, paganism is synonymous with heathenism, but it's not. Paganism is a 'religion,' for wont of a better word, which is connected to nature, which lets man realize he can commune with His Creator. In paganism, there is no need for a priest or formal ritual although you can devise your own if it has meaning for you. When someone repeats rote phrases, it's easy to lose track of the meaning and have the mind wandering off to whether bread was added to the grocery list. In a primeval forest, the mind won't be wandering off into the mundane-- or if it does, the person needs to get out there more often until the pagan in them begins to respond to the sacredness all around. 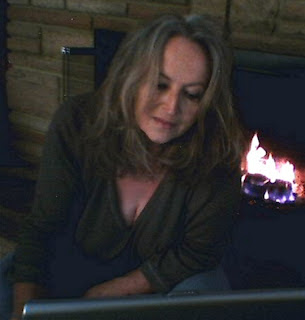 I hadn't thought of why I was building fires regularly in the fireplace for the last couple of weeks, carrying in wood many times during the day to keep it going. It wasn't the heat. The house doesn't need a fireplace for that. There was, however, something in me that knew fire was needed. Then last week, when I went outside, I did not need a name to recognize there was a change in the air. The fact that it had a name was a little wonder to me-- like wow, others have felt this too and for a long time. Paganism is that simple. It is something primal inside of us all-- unless we have closed ourselves off to it. If we have, it's time to wake up.

Whatever we call earth Gaia or whether we see earth as simply geology and biology, we are not in as much control of it as we would like to think. We think our concrete protects us. Perhaps it only isolates us. I believe we are entering a time where we need to get back in tune with the natural rhythms of life and for some of us that will be for the very first time.

My grandson possibly was connected into something more than he consciously realized-- or maybe he did. Whatever the case. he was also right-- yippee!

(The picture at the top is of items I have under my main computer. These sometimes change but currently they are: Moqui marbles, a Celtic spiral, wooden wish boxes, crystals, energy bag, and special stones. I have collected or been gifted with them over many years. They are not magical but intended to convey positive energy-- especially important when I am writing-- whether fiction, non-fiction, or something to a friend.
The picture in front of the fireplace, with my laptop, is obvious from where I was hoping that energy would come.)
Posted by Rain Trueax at Friday, February 09, 2007

It was the notion that we had only four seasons that started my quest. It seemed to me there needed to be names for that time of the year between the solstice and equinox, and of course, there are. It made me want to draw a symbol with eight points, colors that change with the light, from white north winter to light greens of spring. All the way around the wheel. I googled eight pointed star and found lots of old symbols. Then it made me think of the eight-fold path in Buddhism. The symbol for that is called the Dharmachakra. All the real stories are as old as the stars and our own cells.

And heathen comes from the goddess of the hearth -- which your fires would seem to connect you to, as well.

I read the celtic article but it wasn't until I read your blog, did I realize that my desire to paint the essence an vibrations of nature did I realize I am doing a Pegan awareness.

Until reading this I had an impression that paganism was loosely defined as the worship of false gods. Perhaps that is a product of Christian upbringing and the use of the word "pagan" in the versions of the bible (KJ and RSV, as I recall) that were popular in those days.

Your explanation of paganism is one I can readily latch onto, because I already observe and feel and have an awareness of nature, the seasons, the elements, the grunts and groans of our host, Planet Earth. I never before had a word to describe this awareness. Thank you!

I think the words pagans and heathens have been defined by Christians or others in religions. I don't know much about heathens but was loosely using the term as someone with no spiritual beliefs-- which might not be true from what Maya's Granny said.

What I think is happening now is that these words are being defined and changed into what is happening for today-- as beliefs have a tendency to do in even churches.

Pagans I know something about (but am in no formal organization) I do think that way and believe many do-- even some in 'regular' churches. I think it is a time where pagans want to define themselves and we are seeing more about it.

From what I know, paganism is not necessarily a believer in multiple gods (although some would say Christians have three gods despite the justifcation it's all a trinity).

Anyway I think it is an interesting topic to explore further. When we set about to put words to something, define it, that's where the boxes come in and yet without words, we find other people defining us. We can know what we feel inside is true but something as ethereal as spirit can be hard to pin down with words.

Hi Rain... thanks again for visiting my blog. I'm honored.

As a pagan I appreciate your understanding and its compelling to know we exist, not just a handful, but many. And our message remains now as it always has been, respect the earth, don't foul the water, don't pollute the air we breathe.

I choose to be a pagan because my life's path continually nudging me back to the open spaces, the places where my recognition of nature is reciprocated.

Whether back in my anti-"nucular" protest days when 100s of us danced under the moon following Starhawk as she snaked us around the fire, singing and laughing, or in the sweatlodge with one of my brothers, there is a comfort in being close to life's basic forces. And of course, there is a responsibility that accompanies such belief. A responsibility that is far from evangelical and more like Buddhism (as Robin points out in the first reply)

Paganism too - imo - does not suffer poseurs easily. You either are or you aren't and mimicry never rises beyond the superficial. To know the earth rquires a hands on approach, a garden, or like your fire in the fireplace... a living with nature and enjoying its fundamentals.

The laws of nature are the universal truths.

I only learned about Imbolc when I made my Soul Collage calendar this year. I love your symbols by the computer--and the dreamy photo of you before the fire.

What a great post, Rain. And very timely.
Strange enough...I've also had the "need" recently for the fire to be going in our woodstove. (And like you, it's simply an alternate method of heat) But I resonated with the flames and the fire. Sitting there, letting my mind wander, and feeling at "one" with it.
I guess perhaps it is a primal need some of us have. "To everything there is a season...."