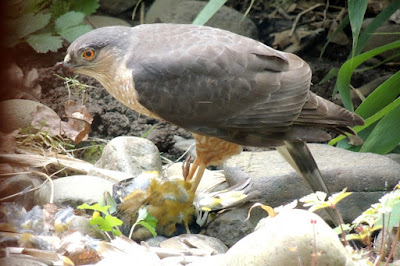 Life is what happens when you're busy making plans. John Lennon

One benefit of old age is being more tolerant of changes... I know, that's not how people think about the old. They think we are stuck in ruts, have made up our minds and not open to changing. I find in my life, it's not true. I make plans with the clear understanding they may well be changed by unplanned events. The last two weeks are good examples.

Plan: When we left our trailer in Redding, we believed we would bring it back to Medford and store it there for the two weeks before we'd be back. In calling various storage sites, we discovered that their fees would run us half the cost of being in the trailer on a pad with full utilities. Obviously that wasn't going to work. We pulled it home.

Plan: The first of May, we'd take the cats, hook up the trailer and head south to watch our granddaughter in a play. Then we had a storm which put a large branch through the plastic cover over our wood storage porch. With more potential storms, that wasn't possible to ignore or fix in time to take much time away from here. We ordered metal for the roof. Cancelled RV park reservation.

Plan: We drive the four hours down, see the play and stay in a motel room for one night before heading home. Roof would be repaired the next day with the help of a neighbor who does a lot of jobs in the community. Coming home from town the day before we were supposed to drive south, we went through a lot of smoke-- slash burning. One of those seasonal things in logging country, where the air is filled with smoke as was our home when we got there. I am very sensitive to wood smoke but hoped for the best. The next morning, I woke coughing, sneezing, with a sore throat. There was no way I could go to a play without hacking my way through it.

Plan: Call daughter and cancel but hope to get to see them as we eventually do head south to Lava Beds NM where we plan to meet a couple where I've gotten to know her on Facebook. It will be fun and interesting as she knows that area quite well having a family history there. Future of this plan-- as yet unknown.

Plan: Beginning April 9th, I wanted the work in progress to be written by pantsing. That means no outline and feeling my way through what happens to what happens next. I had done prep work by laying out a timeline for the family connections, character notes, basic plot ideas, and began writing. I've done this with other contemporaries, and it's worked fine.

This time, I got to last Sunday, coincidentally May 1st, the opening event in the book, and realized, at 38,000 words, my murders were stumbling over each other. Dates were confusing. Some things had happened twice. When writing 2000 to 5000 words a day, that sort of thing happens. So much for pantsing. Off to town to get groceries we needed and to also buy a white board, more post-its, and some dry pens for the magnetic board.

Then I had to skim the beginning and write a few short notes on the post-its to determine what happened when. I think this will work better next time I do it. I still believe that some things are more clear as I write than I could ever plot out ahead of time. Maybe I'll be a combination of both types in the future, a hybrid plotter/pantser.

Printing off a May 2015 calendar, I could keep track of days of the week and dates for the full and new moon. About then I realized 2015 was too close to where I am right now. With four books to follow, I needed more room. So printed off new calendar for May 2014.

My plan is to start the next one within a couple of days while I'm still in the flow of the family's energy. Each story will have a complete romance but the underlying problem, theme, energy will not be concluded until the fifth book-- as plans go.

Assuming my plans for the general outline for each book work out, I have created five covers. I have no idea when any will come out. We have that trip planned for in there where more ideas for another series may get some energy. So time will tell on how this goes. If you are a writer, you know a person gets eager to see the whole project finished. With one like that, it's not possible for me to do it fast. If I was a formula writer, it'd be easier...

And about plans not working out. The photo above has a story connected. It began with a loud bang on the window alongside my desk. Birds fly into it regularly, but this time there were feathers flying everywhere. I looked and saw the tail end of a hawk flying off. Ranch Boss went out to see a stunned grosbeak on the ground. The hawk had gotten it, then dropped it as both hit the window. He thought the grosbeak would survive as it seemed otherwise uninjured. End of story.

Or not. A few minutes later, I looked over to see Raven, our black cat watching out the window with her ears back. I looked to see the hawk calmly eating its lunch. Evidently, it hadn't gone far and had returned for its meal, the grosbeak too stunned to get away.

It might seem sad when a predator kills, but if it cannot kill, it cannot survive. We think it ate part of the bird and took the rest to its mate. A friend identified it as a cooper's hawk. The bird it killed was a younger grosbeak, not mature like the two below. We love watching them as they are so beautiful, but you can't really interfere with the predator, much as we might sympathize with the birds that are its prey. 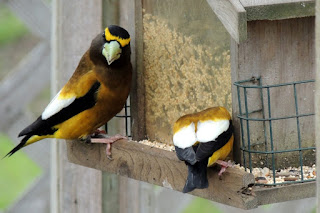 Enjoyed catching up -- I always think of Robert Burns, I thing it was, who wrote: "the best laid plans of mice and men oft gang agree." as best I recall, tho my spelling mat be off. Creatures eat and not all are vegetarians as we humans should know. Those are beautiful birds. Some lovely photos in your recent posts. Interesting account on your writings progression.